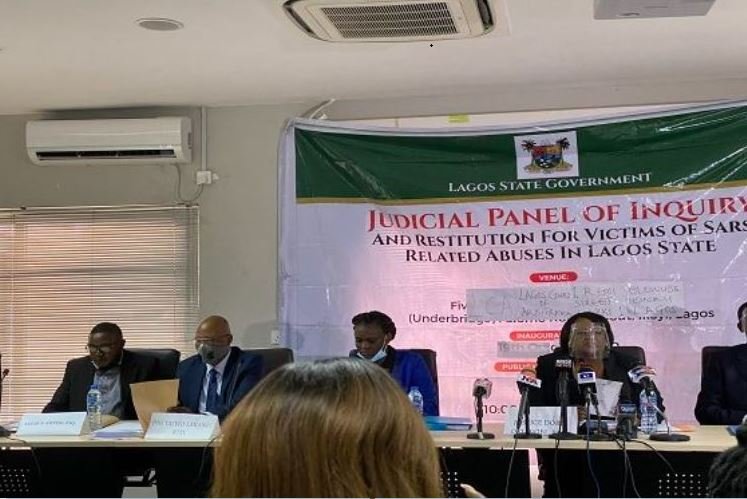 The Lagos State Government is seeking to field two expert witnesses to debunk claims that it had a hand in the military’s alleged shooting and/or killing of #EndSARS’ protesters at the Lekki Tollgate Plaza last October 22.

Its counsel, Mr Abiodun Owonikoko, SAN, on Saturday sought permission for the witnesses from the Lagos judicial panel probing police brutality and the Lekki Tollgate shootings.

Owonikoko’s oral application, if granted, would enable both experts to give evidence on all the Lekki tollgate plaza incident petitions together.

There are no fewer than 14 petitions relating to the shooting incident, out of the 235 petitions received by the panel between October and December 2020.

Counsel for the Lekki Concession Company (LCC) which operates the plaza, Mr Rotimi Seriki, aligned himself with Owonikoko’s prayer.

Seriki also applied to the panel to allow the LCC present a uniform response to all the Lekki tollgate incident petitions.

But the counsel to some of the #EndSARS protest victims, Mr Adeshina Ogunlana, opposed the applications.

According to him, the Lagos State Government had not been accused or alleged to have been involved in the shooting of the Lekki Tollgate Plaza incident.

He said the state and LCC counsel were not representatives or agents of the Nigerian Army.

Earlier, a petitioner Patrick Ukala narrated how he was shot on October 22, allegedly by soldiers.

Ukala testified that he had been at the protest ground since October 18, 2020. He worked in the crowd control unit of the #EndSARS team.

He said: “On the 20th October 2020, we were at the protest ground when we heard that the Lagos State Government had imposed a curfew and was going to send the Nigerian Army to disperse us.

“We were advised that when the army came, we should sit on the floor and chant the national anthem. We later heard the curfew was shifted.

“At 6:43 pm, the army arrived at Sandfiefd junction and started shooting. They were shooting in the air, walking towards the protest ground.

“Their vehicle was driving alongside the soldiers on foot. When they got to the Tollgate plaza, where money is collected from vehicles, they started shooting randomly, some were shooting in the air, others directly at the protesters.

“When the gunshot was severe, the protesters sat on the ground waved their flag and chanted the national anthem. I was hit by a bullet and the flag fell off my hand and I shouted in Pidgin English, ‘This guy don scatter my hand’.

“I managed myself though I was bleeding profusely. My clothes were soaked. I escaped to the waterside at the back of Oriental Hotel.”

Ukala explained that he was ferried away to safety on a fisherman’s boat.

“A protester saw me as I was struggling, I don’t know how he got a fisherman and they took me away to the back of Palm City Restaurant at Lekki.

“I crossed over to Reddington Hospital. Some other injured protesters were already there. The hospital brought out beds and we were all laid down,” he said.

The petitioner testified that his wounds were cleaned, honey was applied to it and he was put on drips before being given an injection.

After his wound was plastered, he was removed from the bed to make space for other badly injured protesters.

Ukala said: “The nurse sat me on a chair. As we were there for about an hour, a doctor came and advised that some of the protesters be rushed to Grandville Trauma Centre.”

He explained that at Grandville, the wound was opened and treated and, following a brief return to Reddington Hospital for an X-ray, the doctor told him he was “lucky” because of the harmless position of the bullet in his body.

He was also told that “It (the bullet) could not be removed that I have to live with it.”

On October 29, 2020, the witness said he was moved to LASUTH, where it was also confirmed that the bullet could not be removed. He said he received treatment till November 8, 2020.

Ukala added: “At LASUTH I met other injured protesters. I met a guy called Gabriel Michael. We called him Unknown Michael because nobody knew anything about him. He was shot on the head at Ojodu.”

He claimed that Unknown Michael was neglected and, “was there till he died.”

“I want the panel to look into the investigation of LCC and the Army. I also want adequate compensation for injured and dead protesters, including myself”, he added.