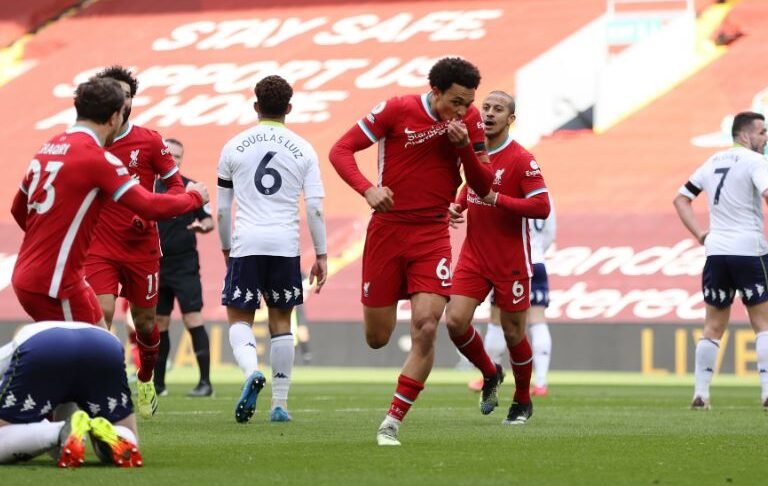 Trent Alexander-Arnold scored an injury-time winner as Liverpool came from behind to beat Aston Villa and end a run of six consecutive defeats at Anfield.

Ollie Watkins – who scored a hat-trick in Villa’s 7-2 win in the reverse game – fired the visitors ahead with a shot which squirmed through Alisson.

Liverpool were denied an equaliser by an extremely tight video assistant referee offside decision. Roberto Firmino fired home from close range but a long VAR review ruled that Diogo Jota was just offside in the build-up.

They did eventually equalise when Mohamed Salah headed into an empty net after Emiliano Martinez parried Andy Robertson’s cross.

That was their first goal in open play at Anfield since 27 December – a run of 765 minutes and 132 shots since Sadio Mane scored against West Brom. They netted one penalty at their home ground in that time.

Villa went close to a winner as Trezeguet’s spinning effort hit the post.

But the Reds kept persisting and Alexander-Arnold curled home from the edge of the box after Villa failed to clear the ball.

Chelsea move back into top four with victory over Crystal palace