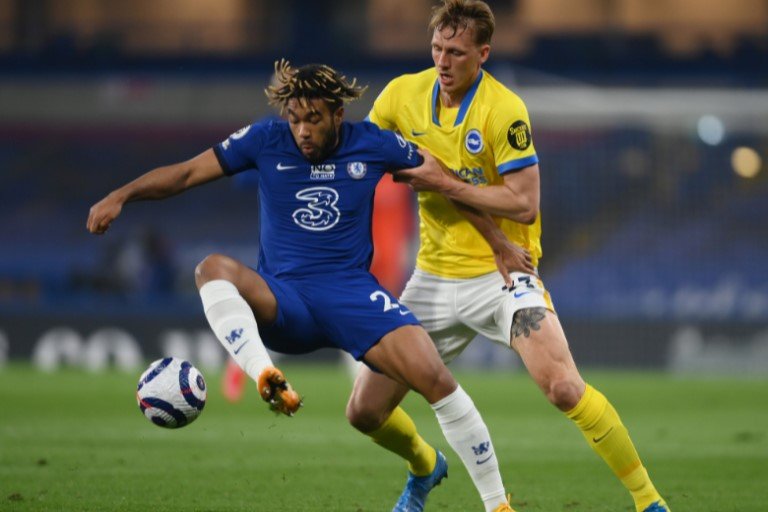 Chelsea shared a goalless draw with Brighton to climb into the Champions Leagues places on a night where the future of European football came to a dramatic head.

The fixture was almost a side note, with the news breaking before kick-off that Chelsea were preparing to pull out of the European Super League at the same time as their fans were protesting the club’s inclusion outside Stamford Bridge.

The Blues’ notice of withdrawal was followed by that of Manchester City, with the other four English clubs later joining them as the controversial new competition unravelled just 48 hours after the 12 clubs involved unveiled their proposals.

With the current Champions League admitting sides on merit, Chelsea will need to finish among the top four in the English top flight, or win the competition, to qualify for a spot among Europe’s elite next season.

The Blues created little but a point was enough to see Thomas Tuchel’s side take up the last of those automatic places, going above London rivals West Ham, who they face on Saturday.

It was in fact Brighton who enjoyed the best chances late on as first substitute Adam Lallana fired wide before Danny Welbeck struck the post from distance.

Defender Ben White was then sent off for the visitors in stoppage time for a second booking as Chelsea looked to break away.

The draw moves Graham Potter’s side seven points above the Premier League relegation zone with six games to play.

The drama started long before kick-off in west London as around 1,000 Chelsea fans gathered outside the stadium in protest at plans for a new European Super League that has been met with widespread condemnation.

Blues goalkeeper Petr Cech, now the club’s technical and performance advisor, could be seen pleading with the crowd to disperse so the team coaches could enter the ground, which led to the game being delayed by 15 minutes.

Chelsea manager Thomas Tuchel says European Super League talk affected his players
It was not long before news began filtering through that Chelsea were in fact preparing documentation to withdraw from the proposed competition and that was met with cheers by those still gathered in the area.

It is reported the decision was taken by owner Roman Abramovich and the Chelsea board after witnessing negative global reaction to the Super League, rather than a direct response to the protests.

Chelsea boss Tuchel said beforehand it was an “annoying and frustrating” distraction for his side as they looked to build on the momentum gained by reaching the Champions League semi-finals and FA Cup final in the past week.

And there was no escaping it during the warm-up as Brighton players donned T-shirts reading “Football is for the fans” and ‘Champions League: Earn it” on them.

The off-field drama did not translate on to the pitch as sides with the two of the best recent defensive records in the Premier League struggled to pick holes in each other.

A long-range Kurt Zouma effort that Robert Sanchez saved comfortably was the best Chelsea could muster before the break, while Yves Bissouma’s deflected effort that looped over the crossbar was as close as Brighton came.

Tuchel’s concerns appeared to be coming to fruition with Zouma’s attempt one of just three in the first half for the Blues, their fewest in the opening 45 minutes of a Premier League game since managing only one against Liverpool in September.

It was a similar pattern after the interval, with a disciplined Brighton keeping their shape well and stifling any probing attacking moves from the hosts.

Tuchel introduced Callum Hudson-Odoi and Timo Werner with just over 20 minutes to go in an attempt to stretch the Seagulls, with Olivier Giroud following soon after.

But it was the visitors who enjoyed the best opportunities as first Lallana shot wide after Chelsea gave the ball away on the edge of their own box and then Welbeck whipped a superb effort against the post.

Tuchel’s changes did have some impact as Giroud turned a Hudson-Odoi cross wide and the winger was then brought down by White, as he earned a second yellow card in the 92nd minute.

It was a 15th clean sheet in Tuchel’s 20th game in charge of the Blues, who have lost only one of their 13 Premier League games since the German’s arrival.

“I was affected so I think the players were affected,” he said afterwards. “We talk of nothing else but Super League before the match. Nobody asked about the match before.

“It is like this. You have to accept the distraction. We tried to create an atmosphere to win the game but could not.”

Brighton, meanwhile, have won just two of their past 10 league matches, but victory at Sheffield United on Saturday would all but secure their top-flight status for another year.

Chelsea boss Thomas Tuchel, speaking to Match of the Day: “We are disappointed. We wanted to have the win and know how crucial these moments are. We wanted to be in a place number three after this game.

“We did not make it and were lucky not to lose. We made big mistakes, looked tired, mentally tired. We did not deserve to win which is maybe for the first time since I come here.”

Brighton boss Graham Potter, speaking to Match of the Day: “We could have won it – we hit the post. We started well, but a couple of errors gave them some chances, but I felt we had the bigger chances in the second half. Our boys were fantastic, and it shows that we are fighting for every point.

On the European Super League: “It has been disturbing, sad and frustrating. It feels like the game has been attacked and the integrity of the game in this country and across Europe. It is about having your fate sorted on the pitch.”

Mourinho to be named Celtic’s coach