Governors, Ooni, others pay tribute as Odumakin is laid to rest
Advertisement 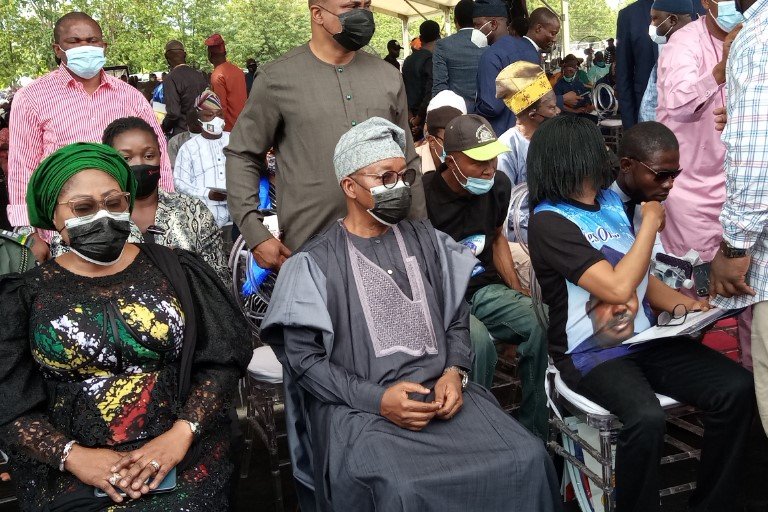 Deceased Afenifere spokesman, Yinka Odumakin, was buried at his Moro home town in Osun State on Saturday amid tears by family members and friends and outpouring of tributes by associates.

His remains were committed to mother earth at his residence on Ewuru Street after a funeral service coordinated by the founder of Sword of The Spirit Ministries International and President of the Pentecostal Fellowship of Nigeria, Bishop Francis Wale Oke.

The deceased Afenifere spokesman died on April 3 as a result of complications arising from COVID-19 infection.

Among the dignitaries in attendance at the funeral service at Origbo Anglican Grammar School, Moro were Osun State governor, Adegboyega Oyetola and his Oyo and Ekiti State counterparts, Engr. Seyi Makinde and Dr Kayode Fayemi.

The corpse was taken from the Origbo Anglican Grammar School, Moro where the final lying in the state took place to his residence for interment around 2:25 pm.

In his tribute to the departed activist, Oyetola said Odumakin’s trajectory through life, whether as an impressionable undergraduate activist in Ife, a purposeful columnist, a fiery anti-dictatorship combatant, a vociferous Afenifere scribe or his political involvement, reads like a profile in courage.

Oyetola said: “He did not live a wasted life. He was an illustrious son of Osun and a man of deep conviction who constantly fought for what is right, just, and equitable.

“He simply lived for the people. He was a phenomenal leader, who, without holding public office, impacted us in unique ways.

“However, we must not sorrow like those who do not have hope. We must find comfort in the truly phenomenal life he lived. We should rejoice, knowing Odumakin has left for a better place.”

Recalling his relationship with the late Odumakin, Governor Makinde said he came late into Afenifere because he was not really interested in politics but became an accidental politician. “That led me to have some traction with my brother, Yinka Odumakin. He spoke truth to power.

“It will take a shining star to light the path of others that are coming behind, and that was what Yinka lived for.

“The struggles will forever be a shining star for us until we get the type of country that we deserve and that himself and other comrades labour for us.

“We will continue his work until we succeed.”

Governor Fayemi on his part said: “We are here to honour a patriot and a comrade; one who consistently spoke truth to power, one who defended the defenceless relentlessly, one who spoke for the voiceless despite intimidations, one who never bore grudges but stood his ground on principle.

“As Afenifere spokesperson, he was democratic to the core. He was a nationalist without question. He was never apologetic about the Yoruba agenda but was also not a secessionist.

“Yinka is leaving us with a legacy to speak truth to power; an unrelenting campaign for restructuring. This country has challenges, Nigeria needs rescuing from the evil merchants who want to drag it down, and that was what he stood for in his days.

“We must not succumb to the merchant of division and secession. We must not give in for them to run this country down, and that is what we can do to keep Odumakin’s memory alive.”

“Who am I to question God? God is powerful. How can he leave a man of 93 and take a man of 54? God does his work the way he likes. He knows why and how he will comfort us.

“Yinka (Odumakin) spoke truth to power. He did great works for Yoruba land, progressives and Nigeria. He was a rare gem not common among this generation.

“Yinka was consistent in fighting for the underdog, against injustice… Yinka was an Awo to the core.

“Afenifere is mourning a tireless fighter for human right. He worked without receiving the reward.

“Yinka is gone but Afenifere will consistently be with his children. The prayer for Afenifere now is that God should quickly give us replacement particularly at this time when the country is burning.

“What he stands for was daring. He speaks truth to power that be.

“I enjoin our leaders to fight against colonial imperialism. I salute Yinka for always fighting against Fulani imperialism. Call a spade a spade, a feudalist is a feudalist. We are suffering in this country.

“Don’t let anybody say we are fighting for secession. We are people that are calling for restructuring to consolidate Nigeria unity. To prevent secession, the President must restructure the country else the system will produce more of Sunday Igboho, Nnamdi Kanu and others.”

The Ooni of Ife, Oba Adeyeye Ogunwusi named Ife-Moro Road after the late Afenifere spokesman, saying: “I have completed all prescribed protocol for the renaming of Ife-Moro Road after you. It is now to be known officially as Olayinka Odumakin Boulevard.

“Similarly, an ultra-modern garden has been named in your honour in my privately owned Students Village in Obafemi Awolowo University where a dignified bronze bust will be unveiled in your eternal honour.”

The Ooni, who was represented by the Sooko, Oba Kemade Elugbade, described the late Afenifere spokesman as an unforgettable patriotic descendant of Oduduwa and a positive factor in Nigeria’s democracy.

He said: “Odumakin’s death was a rude shock when Yoruba nation in particular and Nigeria at large needed him. The news of his demise was a very bitter pill to swallow for the entire country and to us particularly in the House of Oduduwa.

“He was a disciplined Yoruba leader who has been one of the loudest pro-democracy voices in the country.”

In her remarks, the wife of the deceased, Dr. Joe Odumakin, thanked the people, particularly Governor Oyetola, for their uncommon support.