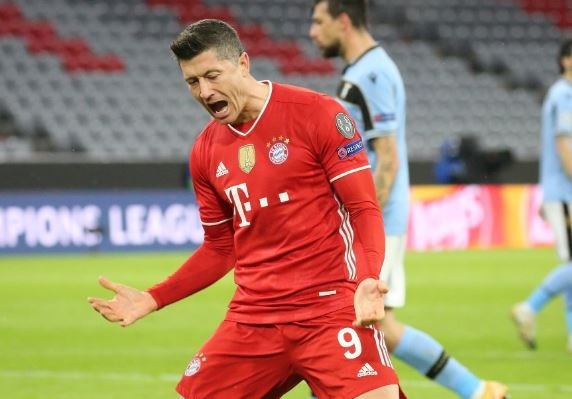 Robert Lewandowski was on the scoresheet again as Bayern Munich cruised into the quarter-finals of the Champions League with a win over Lazio.

The striker coolly slotted home a first-half penalty after Leon Goretzka was pushed by Francesco Acerbi.

Substitute Eric Maxim Choupo-Moting made it 2-0 in the second half with a chipped finish from close range.

Lazio got one back through Marco Parolo late on, but Bayern sailed through with a 6-2 aggregate win.

Lewandowski, who was replaced by Choupo-Moting with over 20 minutes remaining, had earlier hit the post with an excellent long-range effort in another threatening performance.

His goal – a 13th from the spot in the Champions League – meant Lewandowski has been directly involved in more goals in the competition than any other player – with 20 goals and five assists – since the start of last season.

He looked disappointed to be taken off but Choupo-Moting extended Bayern’s lead when he was played through on goal by David Alaba just 121 seconds after coming on.

Lazio, who fell to a 4-1 defeat in the first leg in Rome, were much better in the second half – Parolo heading in an inch-perfect free-kick delivery for the goal, before Joaquin Correa was inches away from equalising when he slid in at the near post.

But Bayern, who dominated possession, could have made it 3-1 on the night when Leroy Sane fooled the defence with a lovely threaded pass for Serge Gnabry, only for him to drag the shot wide.

Defending champions Bayern are now unbeaten in their past 31 home matches in all competitions and will find out their quarter-final opponents in Friday’s draw.