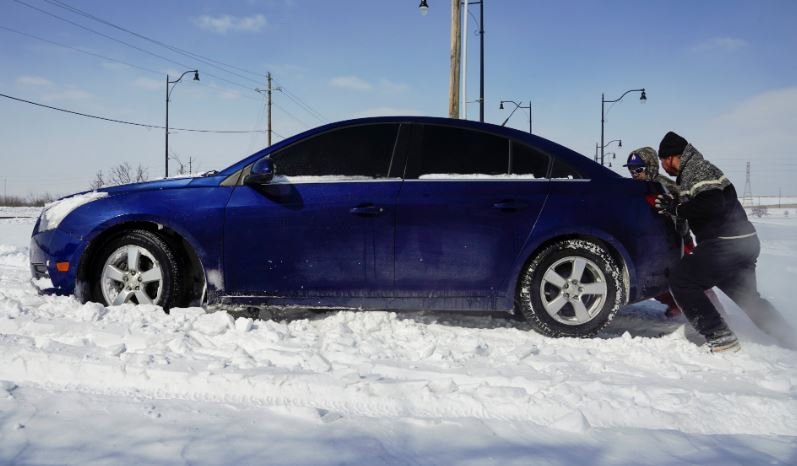 Nearly seven million people in the US state of Texas have been told to boil tap water before consuming it after a deadly winter storm caused power blackouts at treatment facilities.

The huge storm sweeping across the southern US has killed at least 21 people and left millions without power.

Freezing temperatures have also caused water pipes to burst, despite attempts by some homeowners to insulate them from the cold using blankets.

The state’s energy grid has been overwhelmed by a surge in demand as people try to keep warm in some of the coldest temperatures there in more than 30 years – hitting 0F (-18C) earlier this week.

US President Joe Biden earlier approved a state of emergency for Texas, which has been blanketed by snow and ice since the storm swept in at the weekend.

On Wednesday, the head of the Texas Commission on Environmental Quality, Toby Baker, said that issues with water systems were affecting more than 260,000 people in the state.

The mayor of Houston, Sylvester Turner, urged people who have been leaving taps running to prevent pipes from freezing not to do so, in an effort to help conserve supplies.

Water pressure is very low. Please do not run water to keep pipes from bursting. Turn off water if pipes have burst. Please contact us if you don’t know how to turn off water. Be conservative on water usage today. It is needed for hospitals and fires. st

Water pressure is very low. Please do not run water to keep pipes from bursting. Turn off water if pipes have burst. Please contact us if you don’t know how to turn off water. Be conservative on water usage today. It is needed for hospitals and fires. st

Mr Turner said that those without power – and unable to boil tap water – should consume only bottled water for safety.

“Power will not be restored fully, I would say, probably for another couple of days,” he told reporters at a press conference.

Homes in the state are not normally insulated for cold weather, meaning that indoor temperatures quickly dropped to freezing after heating systems failed.

At least four people were killed following a house fire in Houston that officials said may have been sparked by candles. Separately, police said two men found alongside a Houston highway were believed to have died due to the cold.

Mr Turner said that businesses and churches were being used as “warming centres” to help shelter some of the most vulnerable, while also providing bottled water to residents.

“We are still in the midst of this winter storm,” he warned, urging people to avoid the roads or travelling in the mornings and evenings, describing them as the “most dangerous times”.

Why is Texas seeing Arctic temperatures?
Are frozen wind turbines to blame for power outages?
Governor Greg Abbott said that 1.2 million Texans had so far had their power restored, with more coming “on board”.

The governor signed an executive order preventing any Texas natural gas from being exported outside of the state until 21 February.

Mr Abbott also told reporters that every source of power in Texas had been “compromised” – seemingly walking back earlier comments blaming renewable energy for the state’s blackouts. He said his family had slept beside the fireplace covered in “every blanket and pillow we could find in the house”. He tried local hotels, but they were either fully booked or did not have electricity.

Meanwhile, Covid-19 vaccination appointments, which had been postponed due to centre closures and hindered deliveries of doses, were scheduled to resume next week, Mr Turner said.

By Wednesday afternoon, the National Weather Service (NWS) said that the worst of the storm had moved through Texas, but kept more than 100 million Americans under a winter weather warning.

But historically low temperatures are expected to remain for days, the NWS said, with more than 71% of the US covered by snow.

How deadly is the storm?
The recorded deaths include people who have died in traffic accidents, as well as some who suffered carbon monoxide poisoning from running cars and generators indoors to stay warm.

“This is an absolute public health disaster,” one medical official in Houston told the local television station KPRC-TV. “[Carbon monoxide poisoning] certainly happens when it gets cold, but never in these numbers.

One county said it had seen more than 300 suspected carbon monoxide cases during the cold snap. “It’s turning into a mini mass casualty event,” one Harris County doctor told the Houston Chronicle.