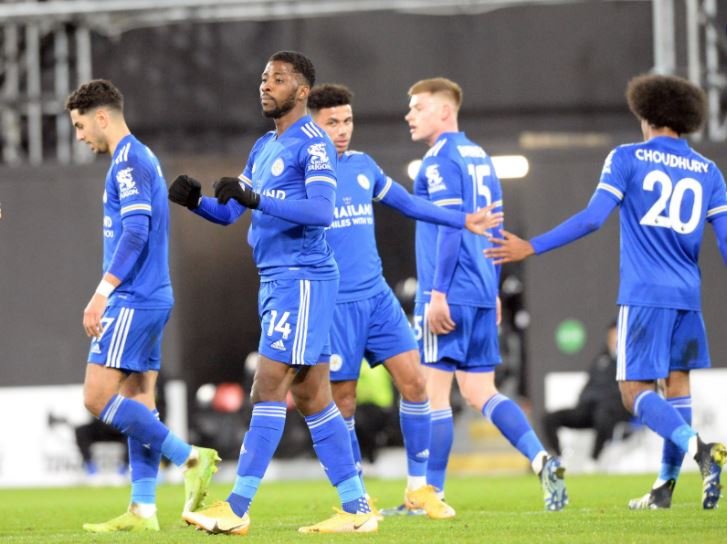 Leicester strengthened their position in the Premier League’s top four with a 2-0 victory over Fulham, whose survival hopes suffered a further blow at Craven Cottage.

James Maddison played a key role in both the visitors’ goals, delivering a delightful in-swinging cross for Kelechi Iheanacho to head home before teeing up James Justin to double the Foxes’ lead on the stroke of half-time.

Brendan Rodgers’ side had three goals disallowed – Caglar Soyuncu’s first-half header was ruled out for a push on Tosin Adarabioyo before Iheanacho and Ricardo Pereira were denied by the linesman’s flag in the second half.

Fulham had chances too – notably when Adarabioyo’s header was palmed over the crossbar by Kasper Schmeichel moments before the visitors’ second goal.

That header, however, was the Cottagers’ only effort on target in the entire 90 minutes.

Maddison the key for Leicester

The Foxes were without injured defenders Timothy Castagne and Wesley Fofana at Craven Cottage, while key duo Wilfred Ndidi and Jamie Vardy are only set to return against Wolverhampton Wanderers on Sunday.

Leicester had earned just one point from their past four league fixtures without Vardy, while winning only six of their 22 league matches without Ndidi since the Nigerian’s debut in January 2017.

However, two superb assists from Maddison steered the Foxes to victory in west London.

The 24-year-old’s teasing delivery from the right gave Iheanacho the simple task of directing a close-range header past Areola, while he showed great composure to tee up Justin for the visitors’ crucial second goal.

The former Norwich City man has now been directly involved in 12 goals in his last 12 appearances in all competitions for the Foxes.

Youri Tielemans also had an excellent game at the heart of midfield, winning possession 10 times and completing more passes than any other Leicester player.

The visitors were happy to contain their opponents for the majority of the second half, as Fulham struggled to penetrate their resolute, well-drilled defence.

Only Manchester United have collected more points on their travels this season than Rodgers’ side, who have now won eight of their 11 away league matches in 2020-21.

Fulham came into Wednesday’s game without a win since beating Leicester 2-1 at King Power Stadium on 30 November.

The Cottagers have proved tough to beat in recent weeks, but their failure to convert chances into goals has seen them lose ground on the teams above the drop zone.

They carved out the first opportunity of the game after 12 minutes, but Justin produced a fine block to deny Aleksandar Mitrovic after a marauding run from Andre-Frank Zambo Anguissa down the left.

Adarabioyo forced Schmeichel into an outstanding one-handed save late in the first half, only for Justin’s goal moments later to leave Scott Parker’s side with a mountain to climb.

Parker brought on Mario Lemina and Ivan Cavaleiro at half-time and the latter went close to halving the deficit within minutes of the restart, dragging a low shot wide of Schmeichel’s left-hand post.

But that was the closest the hosts came to a route back into the match, as their winless league run stretched to 11 games.

Harry Kane returns ahead of schedule