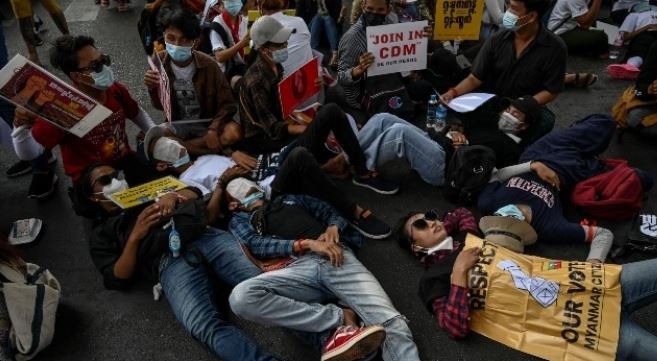 Myanmar security forces carried out a bloody crackdown on a protest against the military coup held in the Yadanarbon shipyard in Mandalay on February 20, 2021. They opened fire on the crowd, killing at least two people, including a 16-year-old.

Photos posted on social media on February 20 show protesters gathering at the Yadanarbon shipyard in Mandalay. Some carry flags, while others have their cellphones out, filming the scene. A child appears in the foreground. Suddenly, everyone starts running. In a video posted on Twitter, you can see people running as the sound of gunshots are heard:

Many protesters came to the shipyard in Myanmar’s second-largest-city to support navy sailors who went on strike after the military coup on February 1. The morning of February 20, security forces flooded the docks in an attempt to force the people striking to get back to work.

This video shows how soldiers were firing to protesters in Mandalay. #WhatsHappeningInMyanmar #Coup20Feb pic.twitter.com/ChRh3MswC3

Security forces opened fire on the crowd several times that day. Numerous videos live-streamed on Facebook or posted online after the fact by both protesters and journalists document this violence. Newsmen spoke to Observers who were eyewitnesses.

A protester at the scene told her story to the Newsmen:

“The soldiers used rubber bullets, air guns and real firearms. We hadn’t done anything! Many protesters were arrested, even though some of them were wounded. My father saw a 37-year-old man killed with his own eyes. They even fired at the ambulance that came to help the wounded.”

After the first shots were fired, protesters found shell casings and bullets on the ground, as shown in this video filmed in a courtyard near Myo Patt Road, next to a monastery.

A video excerpt of the Facebook live broadcast by the media outlet the Voice of Myanmar shows a man getting shot in the same location. Protesters were concealed behind a truck, using slingshots to hurl stones at the security forces, when, suddenly, the security forces opened fire on them:

A 16-year-old died of gunshot wounds: ‘I saw him lying on the ground, nearly dead’

Initial reports state that two people were killed: Thet Naing Win, a 36-year-old carpenter and Wai Yan Tun, a 16-year-old who worked at the market.

Another protester, who spoke to Newsmen, was hiding near the night market when the teenager was shot and killed. She asked to remain anonymous.

An emergency room doctor told Myanmar Now that the teenager was shot with “very powerful bullets.” He was shot during the crackdown by the security forces, as shown by the video posted on Twitter.

People have been paying tribute to the teenager who died during protests by sharing photos and a drawing of him on social media.

The day after the tragedy, hundreds of people paid tribute to the two victims as well as Mya Thwate Thwate Khaing, the young woman who received a fatal gunshot wound to the head on February 9 during a protest in Naypyidaw.

Members of Infantry Division 33 were spotted amongst the security forces deployed to crack down on the protest on February 20. They are easy to distinguish in photos taken by the press because of the red insignia on their uniform, which includes the number “33” in the Burmese alphabet. This division is best known for carrying out a bloody campaign against the Rohingya, an often-persecuted Muslim minority, back in 2017.

Myanmar has been engulfed in mass protests since the coup on February 1, when former leader Aung San Suu Kyi was arrested by the military junta. Even after a violent crackdown on a protest in Mandalay on February 20, thousands of people took to the streets in a general strike the next Monday.