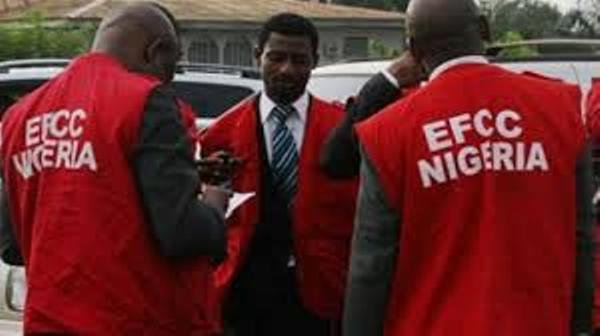 The claims that Economic and Financial Crimes Commission, EFCC investigators pressured former bankers, standing trial for allegedly defrauding the Central Bank of Nigeria in the mutilated currency scam, for a bribe of N96 million for their release on bail, is untrue.

Three former bankers, Ayodele Adeyemi, Ishaq Akano and  Ajiwe Adegoke had in separate affidavit deposed to at the Federal High Court, Ibadan, Oyo State and published in an online platform, alleged that one Hammadama Bello, an operative of the EFCC asked them to raise N96 million to be set free. The trio who are among ex-bankers, indicted in a mutilated currency scam which investigation commenced in November 2014, alleged that for their inability to meet the bribe demand, the said Bello orchestrated their detention in a ‘German Cell’ in Abuja and forcefully seized their properties, claiming he had been collecting rent on the properties.

“I did not at any time request for the sum of N500, 000 or any other sum from either Ayodele Festus Adeyemi or any of his colleagues.

“I did not at any time demand for N12 million or any other sum from the defendants or from any other person.

“I did not ask any lawyer to collect any money from any of the defendants and I challenge Mr. Festus Adeyemi to name the said Senior Advocate of Nigeria”, Bello stated.

He also averred that he was not in position to influence the release of the defendants as he was merely a member of the investigating team.  According to him, “I was not one of the leaders of our team, constituted to investigate the case and I could not have promised Mr. Festus Adeyemi or any other person that he would not be prosecuted.”

Bello described the alleged inhuman treatment of the defendants as “fiction.” Not only is the so called “German Cell” non-existent, he explained that the condition of the EFCC cell where the defendants were detained is decent.

“Contrary to the averments contained in paragraph 19 of the affidavit, I am not aware of the existence of any German cell in the EFCC or in any other place.

“That I am aware that the EFCC cell is one of the best in the country with facilities such as fans, toilets, bathrooms and beddings”, he said.

Wondering why it took Adeyemi and his colleagues six years to come up with this tale of bribery, Bello claimed that the false averments were a desperate gambit by the defendants to incite the public against the EFCC, having unsuccessfully tried to set aside the interim forfeiture of the alleged proceeds of crime.

Adeyemi and his co-defendants allegedly swindled the CBN of hundreds of millions of Naira by fraudulently depositing boxes of N10, 000,000.00 in supposed N1000 notes with ordinary papers, N5 notes, N10 notes, fake currencies and at times with N100 notes while the correct value of N10, 000,000:00 was given the deposit money banks, DMBs in respect of each of the boxes.

“Ayodele Festus Adeyemi and his First Bank colleagues offered huge sums of money to Kolawole Babalola, Olaniran Muniru Adeola and Toogun Kayode Philip as their shares of the fraud in order to allow mutilated, interleafed or corroded bank notes to be accepted by the Central Bank of Nigeria, Ibadan Branch”, Bello said.

To forestall the dissipation of these assets, the EFCC initiated a forfeiture proceeding that led to their seizure on interim basis. Contrary to the claim by Adeyemi that Bello seized his properties and had been collecting rent on them, such forfeiture proceedings are handled by the Legal and Prosecution Department of the EFCC, while the Commission’s Assets Forfeiture and Recovery Management Directorate handles the management of seized assets.

“I did not and could not have employed the services of an agent to manage the forfeited assets”, Bello declared.