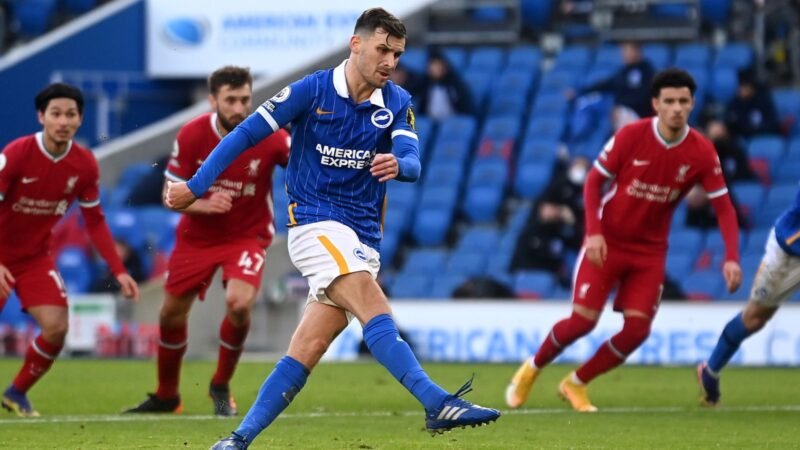 It was Brighton’s second penalty of the game after Neal Maupay fired a first-half spot-kick wide at the Amex Stadium.

The Reds thought they had taken the lead when Mohamed Salah latched onto a Roberto Firmino ball before firing home, but it was disallowed for offside by the video assistant referee.

Barcelona To Save 122m Euros As Players Agree Wage Cut

Diogo Jota broke the deadlock, with his ninth goal since joining the Reds, as he received Salah’s pass before going past two defenders and firing into the bottom corner.

Substitute Sadio Mane believed he had sealed the game with a late header for Liverpool but that was also ruled out by the VAR for offside.

And they were made to pay when Andy Robertson kicked Danny Welbeck’s boot – with Stuart Attwell awarding the penalty after viewing the screen – and Gross slamming the equaliser down the centre.

The visitors lost James Milner to injury, while Brighton had to replace both Maupay and Adam Lallana, who had only been on the pitch for eight minutes.

Liverpool boss Jurgen Klopp had been critical of the TV broadcasters for placing this game on a Saturday lunchtime because they had a Champions League game on Wednesday.

The defending champions go one point above Tottenham, who visit Chelsea on Sunday. Brighton remain 16th, five points ahead of 17th-placed Burnley.

Barcelona to save 122m euros as players agree to wage cut