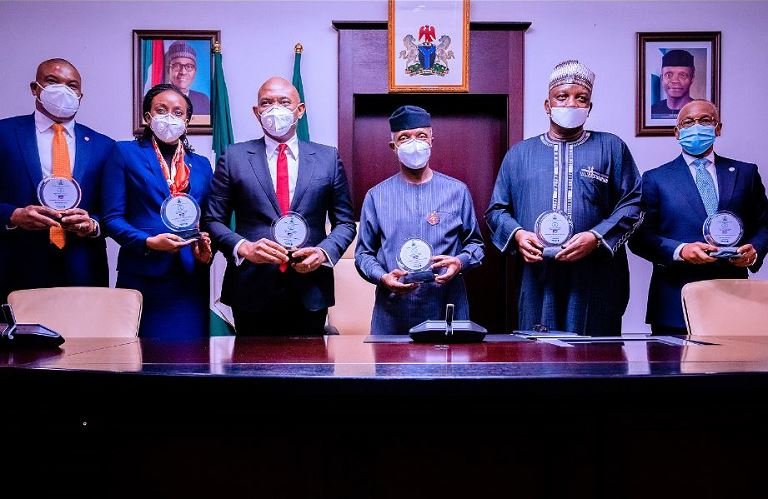 Vice President Yemi Osinbajo says the main objective of developing a power sector that will steadily deliver quality service and sustain itself is on track with the successful acquisition of Afam Power Plc and Afam Three Fast Power, by the Transcorp Consortium.

Prof. Osinbajo stated this on Thursday in Abuja at the signing ceremony of the Share Sale and Purchase Agreements for Afam Power Plc and Afam Three Fast Power Limited. The Minister of Power, Engr Saleh Mamman, officials from the BPE and Transcorp Consortium, were among those that attended the event.

According to the Vice President, “the Buhari Administration’s goal is to eliminate challenges in the Power Sector by improving liquidity in the market through a host of measures, including the recently announced National Mass Metering Program and the transition to Service-Based Tariff. We need a power sector that can provide quality service to Nigerian consumers and sustain itself.”

Speaking on the significance of the development in the administration’s effort at improving electricity supply in the country, the Vice President said “today is a milestone in our continued efforts to accelerate reforms in the power sector. This investment by Transcorp in acquiring “Afam Power Plc” and “Afam Three Fast Power Limited” is the first of many new investments planned in the sector across the value chain from Generation to Distribution.”

His words: “the Afam Power Plc and Afam Three Fast Power Limited plants have a combined capacity of almost 1,000MW. The current usable (operational) capacity of 240MW from Afam III and about 100MW from Afam Plc speak to the opportunity that the Transcorp acquisition can bring. We expect that under Transcorp’s ownership the operational capacity of the facility will be raised to its full capacity.

“We have seen the progress that Transcorp has made with the Ughelli Power Plant in raising the operational capacity significantly (since it acquired the plant in 2013) and we expect nothing less from the Afam acquisitions.”

The Vice President noted that “the Afam cluster houses multiple power plants outside of those being acquired by Transcorp (including those owned by Shell Petroleum Development Company and Sahara Energy) and is an energy hub for the country. We have no doubt that the addition of Transcorp to the community will come with the forward-thinking Corporate Social Responsibility initiatives that Tony and his team are known for.”

Prof. Osinbajo assured investors that the Federal Government in collaboration with other stakeholders will “continue to work on Ease of Doing Business reforms to drive foreign investment, but our local investors are always a great litmus test for the investment environment and this transaction is a confirmation of the reform trajectory the Administration is leading in the power sector.”

Earlier in his remarks, the Chairman of Transcorp Consortium, Mr Tony Elumelu said the acquisition of both plants was a confirmation of the private sector’s confidence in the Buhari administration’s power sector reforms.

He said though the journey to acquire the plants has been long, it’s successful acquisition and subsequent operation by Transcorp Consortium would lead to improved access to electricity and better livelihoods.

On his part, the Director-General of the Bureau for Public Enterprises (BPE), Mr Alex Okoh, said the completion of the sale of the Federal Government’s shares in Afam Power Plc and Afam Three Fast Power Limited is a demonstration of the Buhari administration’s commitment to promote an efficient electricity supply industry in order to meet the consumers’ demands and drive the process of sustained social economic growth.

Okoh said government’s objective is not just to privatize its assets, but to hand them over to competent investors, noting that Transcorp Consortium has signaled an ambitious development plan for Afam Power and has committed to investing $350 million in the combined power assets for this purpose.”

“In addition to the new Afam Three Fast Power plant with an installed capacity of 240 megawatts, the consortium has committed to ramp up power generation of the plant to its rated capacity of 726 megawatts within a period of five years, thereby adding an aggregate amount of 966 megawatts to the national grid,” Okoh added.