Republicans: The undoing of Donald Trump by Seun Bisuga
Advertisement 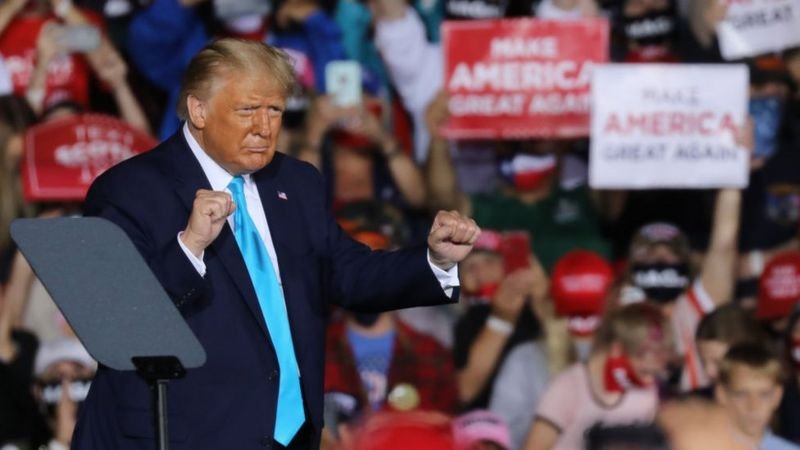 For President Donald Trump, charity does not begin at home. In 2016, he was the new kid off the block. His race against Hillary Clinton was pretty much a Republican versus Democrat party contest and even though some Republicans did not agree with his styles, insults, track record, etc they simply threw their weight behind him quietly or did not vote at all.

Four years after his Presidency, many things have changed; these Republicans like many Democrats see 2020 election as fighting for the soul of the United States and for the first time ever a record number of Republicans are not only boycotting his reelection bid but are actively campaigning for his rival, Vice President Joe Biden.

But 2020 is not about Trump alone but also about those Republicans in close races running for reelection in the United States Senate. In some cases, these anti-Trump Republicans are not necessarily asking people to vote Biden but are just kicking against Trump staying the White House for four more minutes.

In 2016, the polls proved to be a sham as Hillary Clinton and the Democrat found out after the election with over 4 million people who voted Barack Obama not turning out to vote Hillary, put simply, millions of Democrat voters got complacent but not in 2020.

Early voting has already surpassed the 2016 record by over 100 per cent and mail in voting often opposed by Trump has gained more widespread acceptance following court rulings in its favour. So what is Trump against? He is against Democrats, Independents and more importantly his own party, the Republicans.

Take the Lincoln Project for example; they are an American political action committee formed in late 2019 by a number of former Republicans. The goal of the committee is to prevent the reelection of Trump in the 2020 presidential election and defeat all Republicans in close races running for reelection in the United States Senate.

The Lincoln Project have been active on social media and have put up ads that have riled the President and his family than the Biden campaign. Only on Friday, Jared and Ivanka Trump threatened to sue Lincoln Project for their Times Square ads targeting both of them.

On social media, they have gotten under the skins of the Trumps and other Republicans working with him. Lindsey Graham and Mitch McConnell have been hit by the Lincoln Project and these blows are landing right in their faces but even worse are that there are other Republicans who have rallied their base for Biden.

Republican Voters Against Trump and 43 Alumni for Biden are other Republican groups campaigning against Trump.

The Republicans Trump is up against

The list of disgruntled Republicans include serving US lawmakers like Senator Chris Coons, Senator Mitt Romney, Senator Lisa Murkowsk and Rep. Francis Rooney have all said they are not voting for Trump but will consider a vote for Biden.

Cindy McCain, the widow of United States Senator, Vietnam veteran, and 2008 Republican presidential nominee John McCain from Arizona has endorsed Joe Biden drawing criticism from Trump. The Republicans associated with the McCain’s will most likely be voting Biden or not voting Trump at all, that is not to say some will still not vote for him but it is a great loss.

Former Republican Governor John Kasich, George Bush administration Secretary of State Colin Powell and EPA Director Christine Whitman are some of the Republicans who have not only endorsed Biden but appeared at the Democratic National Convention.

Former Republican Senators like David Durenberger, Gordon J. Humphrey, John Warner and Jeff Flake have all warned against a second term of Donald Trump and have come out to support Biden.

According to Forbes, a group of 73 former US national security officials in the Republican administrations, including former heads of the CIA and FBI and Trump administration officials, endorsed Biden, asserting that Trump’s “corrupt behavior renders him unfit to serve as president.”

What about those who worked in his administration? Elizabeth Neumann, Anthony Scaramucci, Miles Taylor, Olivia Troye, and many others have knocked Trump and have supported the Biden campaign.

The list goes on and on and this clearly shows that the incumbent President is not up against Democrats and Independents but against members of his own party.

It is common knowledge that a house against itself cannot stand. Trump has his base intact but he is losing members of the Republican Party and also losing ground among the Independents. It looks increasingly unlikely that he will win at the polls but at the Supreme Court, with Amy Coney Barrett’s confirmation imminent, he has better chances of winning at the apex court.

Seun Bisuga is a journalist, political and social analyst and can be reached @bisuclef