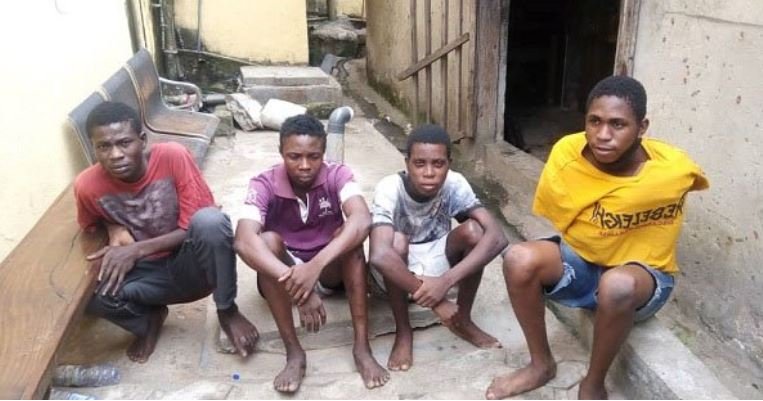 Rasheed Odetola, 25, John Zion, 23, Damilare Salami, 20, and Adeboye Dayo, 25, were arrested by men of the Special Anti-Robbery Squad (SARS) at the weekend allegedly with a locally-made pistol, four unexpended cartridges and a stolen phone.

They denied being armed robbers, insisting that they were land thugs.

The suspects were arrested during a fight with some men.

Odetola said, “It is true that the gun was found with us. We are land grabbers’ thugs. We use the gun to protect ourselves against our opponents.

“Sincerely, I do not know what caused the clash. I only saw three of them beating one of us and we cannot fold our arms and allow them to beat him.

“After we were separated by some elders in the community, one of the boys started shouting that we took his phone.

“After searching us, unfortunately, the Tecno phone was recovered from one of us. We were later taken to Elemoro Police Station, Ajah. We were searched at the station and a locally-made gun was found on us.”

Zion said he picked the phone from the floor during the fight.

Police Commissioner Hakeem Odumosu said the command will investigate and bring perpetrators of crimes to book.