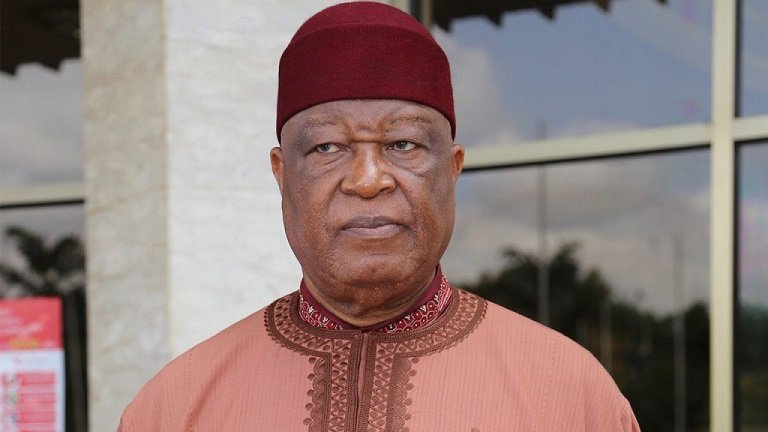 Hundreds of PDP and SDP followers joined him at his Mbawar Ward in Konshisha Local Government Area of Benue State where he said his return followed due consideration for his political environment and the state.

The former PDP national chairman described his return to APC as home-coming.

Between 2015 and 2019, Gemade represented Benue North East Senatorial District on the platform of APC.

APC State Chairman Abba Yaro, who received Gemade on behalf of the party, said: “We were not happy when you left. Now that you are back, we are happy. It’s a good day for APC because Chief Gemade is a big fish.

APC and PDP are the two leading political parties in Nigeria

“Let me assure you that there is no new APC or old APC. Everyone is treated the same, and we all have equal rights. We are all brothers and sisters. Therefore, let us support one another and work together as a team.

“If the state secretariat of the party has offended you in anyway, forgive us,” Yaro said.

He was represented by Simon Agbo Akorche.

The APC on Sunday said the return of Gemade and others was a signpost of the successful reconciliation by Governor Mai Mala Buni-led Caretaker/Extra-Ordinary National Convention Planning Committee of the party.

In a statement in Abuja by its Deputy National Publicity Secretary, Yekini Nabena, the party said: “The APC Caretaker Committee, led by Governor Buni, has created a conducive and sincere environment to address many of the grievances among our party ranks and return the party to its progressive and lofty heights.

“We assure all true progressives who left the party over whatever grievances to return and join the current efforts to reposition the APC and further achieve our pro-people plans for the country.”

The PDP in Benue State, through its State Publicity Secretary Bemgba Iortyom described that defection as irrelevant because Senator Akume was not present.

“Underscoring the irrelevance of this charade of a decamping is the loud question. As a former national chairman of a ruling party, former minister and erstwhile senator, why was the Benue State leader of the APC, Senator George Akume, conspicuously absent at the decamping ceremony?”