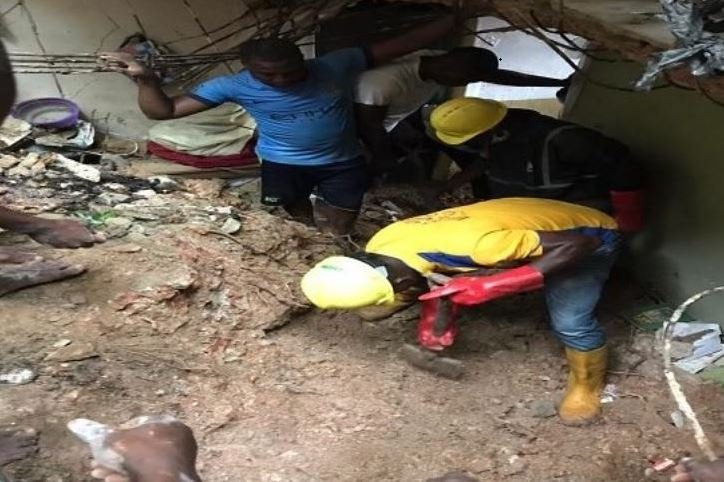 Two children were confirmed dead and 10 others injured after a story building collapsed in Lagos on Wednesday.

The incident occurred at 46, Gafari Balogun Street, Ogudu, around 12:30pm.

It was gathered that the building collapsed following a mudslide which was occasioned by heavy downpour in that part of the state.

According to the Director General (DG) Lagos State Emergency Management Agency (LASEMA), Dr. Femi Oke-Osanyintolu, the two children were extricated from the rubble of the collapsed structure after residents raised alarm that they were missing.

He said the mudslide hit the building from the rear leading to the kids- a boy and a girl- being trapped.

Oke-Osanyintolu said all those who sustained injuries were treated on the spot and discharged, addig that the scene has been cordoned off.

He said: “The LRT received a distress call at 12:40pm about a collapsed building at 46, Gafari Balogun Street Ogudu. On arrival at the scene by agency responders, it was observed that a building collapsed as a result of a mudslide at the rear of the building caused by heavy rainfall.

“The agents were informed that two children, one male and one female were trapped and immediately commenced a search and rescue operation.

“Unfortunately, they were found dead and their remains have been transported to the mortuary. Ten people sustained injuries and were treated on the spot. Integrity test will be carried out on the remainder of the building which has now been cordoned off.”

He said LASEMA officials also responded to a distress call at Ibiye Bus Stop, Morogbo along Lagos-Badagry Expressway where a tanker laden with kerosene fell and spilled its content.

The 45,000 capacity tanker was said to have blocked the road causing standstill of motor traffic along the busy road with fears of a fire outbreak should there be a trigger.

The DG said his men were quickly deployed to the scene where an empty tanker and tow truck were brought in to transload the kerosene and take the fallen truck off the road respectively.