China has reinstated a strict lockdown near Beijing, affecting around 400,000 people, after a small surge in cases.

The restrictions have come into force in Anxin county in Hebei province near the capital.

After the pandemic emerged in China at the end of last year, the country has managed to get new infections to a consistently low level.

To avoid a second wave, even small surges are taken very seriously by the country’s health authorities.

What is happening in Hebei?

Officials announced on Sunday that Anxin would be “fully enclosed and controlled”.

Only essential workers are allowed to leave their homes, while one member of a household is allowed to go out once a day to shop for necessities.

No non-residents residents will be allowed to enter buildings, communities or villages. Authorities have warned anyone violating the rules will be punished by police.

Anxin is around 150km (90 miles) south of Beijing. Chinese media say there have been 18 cases in the county since the beginning of the recent surge in Beijing two weeks ago.

The area is not nearly as densely populated as China’s large urban centres, and local health experts said they were optimistic the spread could be stopped. 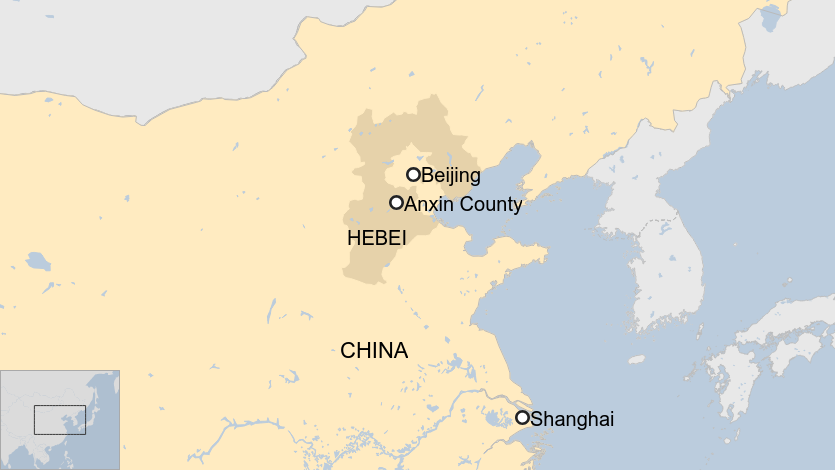 What is the situation in Beijing?

China’s recent numbers remain the envy of most other countries hit by the virus. Yet a recent spike in Beijing has authorities fearing a possible second wave.

Over the past 24 hours, Beijing reported 14 new cases of the virus, taking the total since a mid-June outbreak in a food market to 311.

While this is a small number compared with the thousands of daily cases in the US or South America, China reacted quickly to contain any spread.

Several neighbourhoods in Beijing were put under restrictions, travel was limited, and a massive wave of fresh testing was rolled out.

Before the recent spike, the Chinese capital had gone 57 days without a locally-transmitted case.

How is the rest of China dealing with the virus?

In general, China has successfully “flattened the curve” in recent months.

After passing 80,000 confirmed cases at the start of March, it has added only around 4,700 since then.

Since mid-June, new infections have been mostly limited to Beijing with some spill over into neighbouring Hebei.

The rest of China has seen only a small trickle of single-digit infections, most of which were imported cases, which means travellers returning from abroad.

US Senator forbidden from speaking on Senate floor