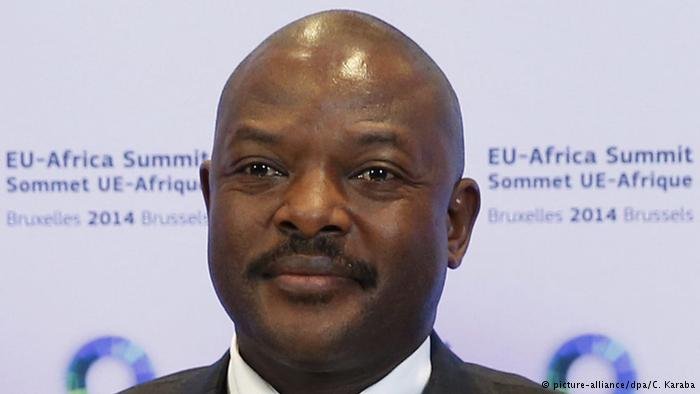 He was admitted to hospital on Saturday after feeling unwell, his condition improved but on Monday he had a cardiac arrest and efforts to revive him were unsuccessful, officials say.

After 15 years in power, Mr Nkurunziza was due to step down in August.

In 2015, the announcement that he would run for a third term plunged the country into chaos.

It sparked anger as some questioned the legality of a third-term bid.

There was a failed coup attempt, hundreds of people died in clashes and tens of thousands fled the country.

After a change in the constitution, he was able to run for a further term in last month’s election but he decided to retire and was to be known as the “supreme guide to patriotism”.

The former rebel leader took pride in the fact that his administration brought peace to Burundi.

But his government was criticised for widespread human rights abuses.

What was his role in the civil war?

Before the civil war, Mr Nkurunziza, who had graduated in sports education, was a teacher and assistant lecturer at the University of Burundi.

He survived the killings of 1993 when ethnic Hutus were targeted at the university and joined the Forces for the Defence of Democracy (FDD) rebel group.

He emerged as its leader and after the 2003 peace deal, Mr Nkurunziza was named minister of interior before parliament elected him president in August 2005.

Outside of politics, he was well known for his love of football. At one time he was the coach of the army football team and as president had his own side – Hallelujah FC.

She was rumoured to have tested positive for coronavirus – a disease Mr Nkurunziza had appeared to downplay, holding an election in the midst of the outbreak, and even expelling World Health Organization representatives from the country.

The government has announced seven days of national mourning.

Related Topics:BurundiForces for the Defence of DemocracyPresident Pierre Nkurunziza
Up Next