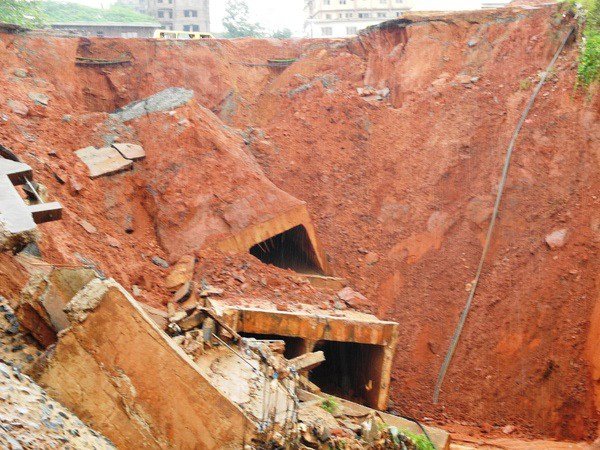 The Senate on Tuesday considered a bill to address the problem of erosion in the country, with special focus on the South-East.

The bill which scaled second reading seeks to establish the Erosion Control and Prevention Commission.

Sponsor of the bill, Senator Ifeanyi Ubah (YPP – Anambra South) in his lead debate on the bill, said the establishment of a Commission for the purpose of erosion control and prevention had become imperative in view of the catastrophic impact of erosion in several parts of the country.

“Almost every part of this country is characterized by one environmental problem or the other but, however, the menace of erosion is unarguably the severest in terms of devastation and destruction for instance the 2012 flooding in Ibadan Oyo State, the coastal erosion in Lagos, Bayelsa and Rivers States and almost all parts of Anambra State. It is also very important to note that gully erosion is almost taking over the entire landmass of the South East and South South.

“The problem of erosion is not catastrophic in the southern part of Nigeria, while desertification is in the North, but with the enactment of the Green Wall Act by the National Assembly, the issue of desertification was laid to rest.

“In the southern part of the country, erosion is responsible for the widespread destruction of transportation and communication systems, degradation of arable land, contamination of water supply, isolation of settlements and migration of communities.

“From available statistics, more than 3,500 gullies occurred in the south east states alone. These gullies are formed by surface runoff from localized rainfall event of high intensity in the fine-to coarse-grained sand and sandstones,” Ubah said.

Citing a World bank survey carried out on Nigeria in 1990, the lawmaker stressed that “erosion is one of the three main environmental problems facing Nigeria.”

According to him, the study noted that “gully erosion causes damage with an annual cost to the nation estimated at N800 billion naira.”

Senator Ajayi Boroffice (APC – Ondo North), in his contribution, however kicked against the establishment of a Commission for the purpose of erosion control in the South East.

According to the lawmaker who is the Deputy Senate Leader, an amendment to the Ecological Fund to accommodate the erosion problems in the South East would address all challenges faced by the region.

Senator Rochas Okorocha (APC – Imo West), while throwing his weight behind the bill said the commission when established, would not only address the erosion challenges faced by the South East, but also every other part of the country affected adversely by such environmental challenge.

Senator Ibrahim Gobir (APC – Sokoto East), argued that “creating a Commission will be a burden on government”, particularly at a time that it is trying to cut down costs.

He, therefore, advocated for the adoption of preventive measures through the introduction of legislation by the National Assembly.

I’m his remarks on the bill, President of the Senate, Ahmad Lawan, said, “the debate tended to sway whether we need a Commission or not, but the fact is we have to address the ecological challenges we have in the country.

“If we have gully erosion that is destroying the lands in various parts of the country, especially in the south east, then we have to do something, whether it is a Commission or not. I believe that there are other ecological challenges in other parts of the country.

“Coastal erosion is also a strong challenge in the Nigerian coastal environment, just as desertification is a big problem in the northern part of the country.

“Similarly, when we have gully erosion, it is just not about stopping the erosion, there are other things that need to be done beyond stopping it because communities’ livelihoods are affected. So, you need to have something comprehensive.

“Can we make the ecological fund office to be responsible for all ecological issues and then take it as one institution that will address desertification and other ecological problems like gully erosion and so on? Can we do that in light of the arguments of our colleagues, or do we need separate agencies to address the various issues?

“We must ensure that government attends to these ecological problems because people are affected. Like Senator Rochas Okorocha said, people lose their lands, properties and villages and this is not something that we should be arguing about as to whether we need a Commission or not. How do we address the problems as quickly as possible to safeguard our communities?”, Lawan queried.

The bill after scaling second reading was referred by the Senate President, Ahmad Lawan, to the Committee on Environment.

Other bills which scaled second reading on the floor during plenary on Tuesday are: Nigerian Local Content Development Enforcement Bill; a Bill for an Act to provide for the establishment of the National Transport Commission as an Independent Multi-Modal Economic Regulator for the Transport Industry; and a Bill for an Act to amend the Petroleum Product Pricing Regulatory Agency Act.

The bills which were sponsored by Senators Teslim Folarin (APC – Oyo Central); Abdulfatai Buhari; and Gershom Bassey, were referred by the Senate President to the Committees on Local Content, Land Transport and Petroleum (Downstream).

The Committees are expected to report back to the Senate in four weeks.