We feel we're together when you're with us, Catholic bishops tell Osinbajo
Advertisement 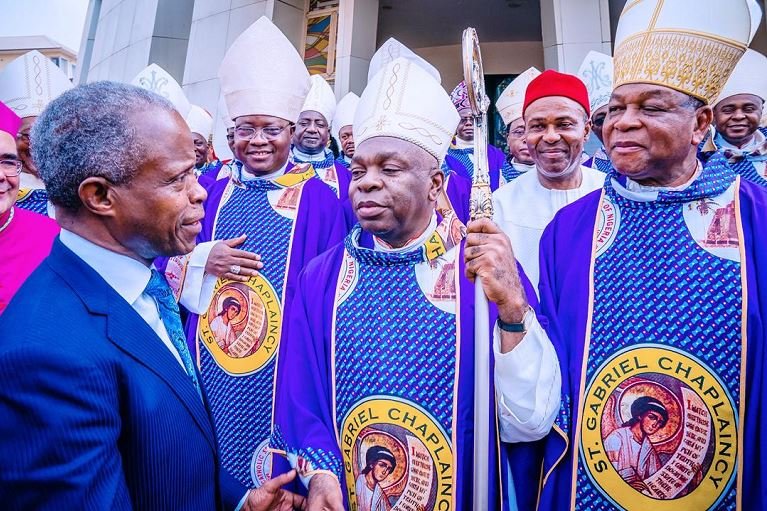 Catholic Archbishop of Abuja, His Lordship, the Most Rev. Ignatius Kaigama has commended Vice President Yemi Osinbajo‘s demonstration of love and solidarity with Nigerians including the church at all times.

In a candid review of the security situation in the country and a down-to-earth observation of Prof. Osinbajo’s disposition to matters of faith, and passion for the people, Kaigama said it is important that people have access to their leaders.

Archbishop Kaigama expressed this sentiments in his sermon at the opening mass of the first 2020 plenary meeting of the Catholic Bishops Conference of Nigeria (CBCN) held at the Catholic Secretariat of Nigeria, Abuja on Sunday.

According to Kaigama, “I am so happy that our Vice President is here; it is not just being here but there is very profound sacramental blessings that he is here; when you are with us and we are suffering, we are together but when there is a gap with you, there is a feeling of insensitivity.

The Vice President, on the invitation of the CBCN, attended the opening mass which is a prelude to the plenary meeting of all Catholic Bishops of Nigeria annually.

Speaking further about the need for a much closer relationship between political leaders and their constituents, the Archbishop, citing the example of Prof. Osinbajo’s uncommon love and concern for the development of society, said, “so much is happening in our country today that is why we need more patriotic Nigerians to help overcome some of the issues.”

He said: “We need to also work together to eradicate or at least reduce the level of poverty; the level of diseases, sickness and ignorance, unnecessary deaths and other issues affecting us.  So much is happening and that is why we need more patriotic Nigerians to come forth and help address these issues.”

Continuing on the role of religious leaders in maintaining harmony and order in the society, Archbishop Kaigama said the habit of condemning political leaders and people in positions of authority, in places of worship was harmful to society and inimical to its growth and hence should be stopped.

According to him, “Our primary task as religious leaders is to steer the people to conversion and holiness, but because of poverty and hardship being suffered by the people, preachers are forced to become miracle workers or political revolutionaries throwing verbal bombs, missiles, grenades, poisonous gas and all sorts of things at political leaders from the pulpit.

“Now if you go to preach anywhere, all they want you to do is to abuse the authority for causing the poverty and social deprivation that we have but that is not the message of the Gospel.

He urged the Church to continue to pray for political leaders at all levels for the progress and development of the country and called on government to collaborate more with faith-based institutions in order to deliver the basic needs of the people.

Dignitaries at the meeting include the Governor of Imo State, Sen. Hope Uzodinma, Ministers of Transportation, Mr Rotimi Amaechi, Science and Technology, Dr Ogbonnaya Onu, amongst others.