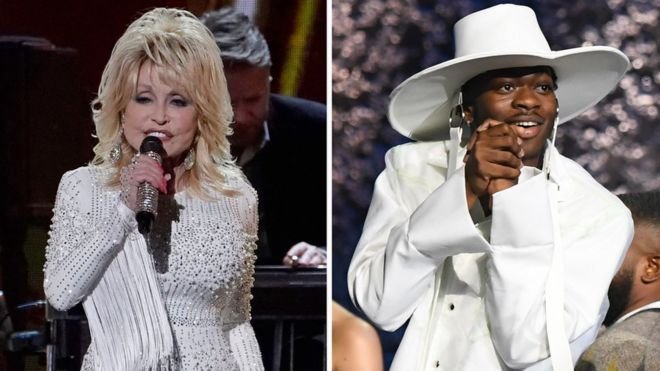 The country star picked up best contemporary Christian song for God Only Knows, a duet with King & Country.

Many recipients have paid tribute to basketball star Kobe Bryant, who played for 20 years at the Staples Arena, where the Grammys are taking place.

Recording Academy CEO Harvey Mason Jr opened the pre-show, where the bulk of the night’s 84 awards are distributed, by recognising the star’s contribution.

“As most of you may know, we lost Kobe Bryant in a tragic helicopter accident today,” Mason said,

“Since we are in his house, I would ask you to join me in a moment of silence.”

It is thought Alicia Keys will commence the main ceremony with a further tribute to Bryant and his family.

Hundreds of fans have gathered outside the venue after the star died in a helicopter accident earlier in the day; while his image is being projected on screens around the arena.

Inside, musician John Legend said he was “sad and stunned” by the news.

DJ Khaled added that a planned tribute to rapper Nipsey Hussle would be expanded to recognise Bryant.

The tribute to Hussle, who was shot dead in Los Angeles last year, will come hours after he won a posthumous Grammy, best rap performance, for his song Racks In The Middle.

The trophy was collected by his family, including his grandmother, who told the audience: “I want to thank all of you for sharing the love I felt for him for all of his life”.

Parton wasn’t present to accept her award, but King and Country told the story of how she had ended up singing on a remix of their hit single.

“She said, ‘I love this song because it’s reaching to the marginalised, to the depressed, the suicidal, which is all of us at some point,’” said the duo. “And then she said, in her Dolly accent, ‘I’m going to take this song from Dollywood to Bollywood to Hollywood.’”

Other early winners included British dance act The Chemical Brothers, whose single Got To Keep On was named best dance recording; and Michelle Obama, who won best spoken word recording for the audiobook of her memoir, Becoming.

Spanish singer Rosalía also picked up best Latin recording for her album El Mal Querer – and said she was looking forward to her “flamenco-inspired” performance during the main ceremony, which starts at 01:00 GMT on Monday, 27 January.

Other performers on the line-up include Ariana Grande, Aerosmith and Billie Eilish.

Lizzo leads the nominations, with eight nominations in total, while Lil Nas X and Billie Eilish have six apiece.

All three have picked up awards in their respective genre categories during the pre-show, leaving the race for the night’s “big four” marquee categories (album, song and record of the year; and best new artist) wide open.

Scottish singer Lewis Capaldi is also in the running for song of the year, for his heart-rending ballad Someone You Loved.

Speaking on the red carpet, he said he intended to make the most of the night.

Aunty vs Biggie: What you need to know about reality TV’s personalities

Billie Eilish is the big winner at the Grammys