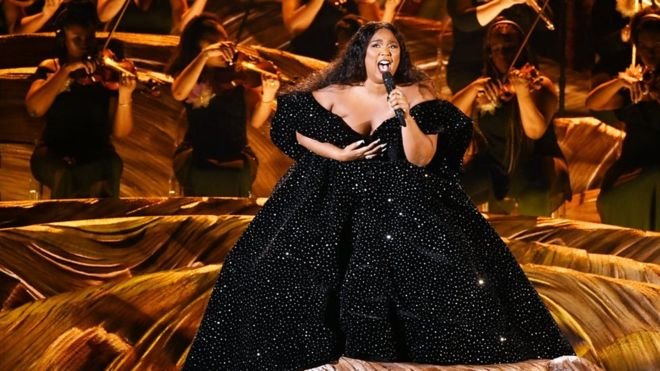 The 2020 Grammys ceremony has opened with a heartfelt tribute to basketball player Kobe Bryant, who died on Sunday.

“Tonight is for you Kobe,” declared pop star Lizzo, opening the show with her stirring ballad Cuz I Love You.

Host Alicia Keys then dedicated the show to Bryant’s memory, with an a-capella version of It’s So Hard To Say Goodbye, accompanied by Boyz II Men.

The show is taking place at the Staples Center, where Bryant played his entire career with the LA Lakers.

News of the star’s death at the age of 41 stunned artists and performers backstage at the arena when it broke earlier in the day.

“I genuinely thought it wasn’t real,” said pop star Billie Eilish. “I was in the green room… and I was like, ‘Oh that has to be fake’”.

The star, who grew up in Los Angeles, added: “Everybody knew Kobe. Everybody. It’s genuinely unbelievable.

“I feel like anything I say is not enough for what’s going on.”

The mood was sombre as the ceremony started, and Keys acknowledged the atmosphere in her opening speech.

“Here we are together on music’s biggest night, celebrating our artists that do it best,” she began “but, to be honest with you were all feeling crazy sadness right now, because earlier today Los Angeles, America and the whole wide world lost a hero.

“And we’re literally standing here, heartbroken, in the house that Kobe Bryant built.

Kobe Bryant has died in a helicopter crash

“Right now, Kobe and his family and all of those that have been tragically lost today are in our spirits, in our hearts, in our prayers, they’re in this building.

“I would like everybody to take a moment and hold them inside of you and share our strength and our support with their families.”

“I know how much Kobe loved music,” she added later, “so we got to make this a celebration in his honour.”

Later in the show, Run-DMC held up one of Bryant’s number 24 vests – which the Lakers have said they will retire following his death.

A further tribute to the basketball legend is expected during the show.