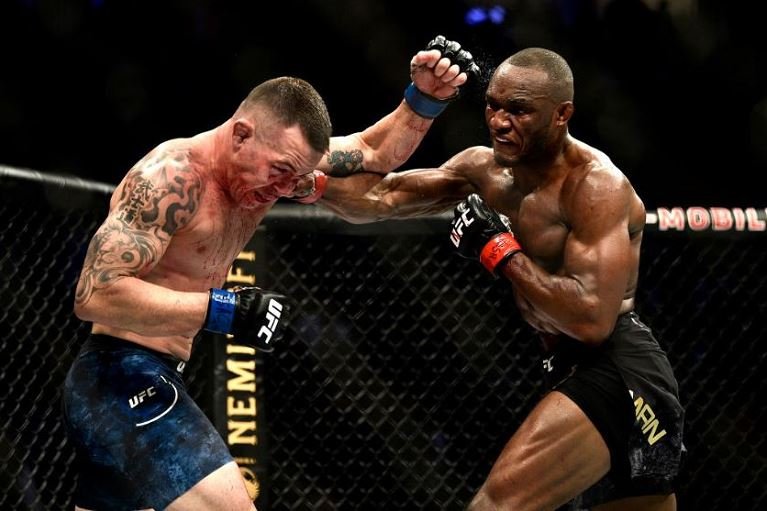 Covington (15-2), who adopted the mannerisms of a MAGA-loving, pro wrestling-type villain, challenged Kamaru Usman (16-1) for the UFC welterweight title in main event of UFC 245, and seemed to be winning the bout at T-Mobile Arena in Las Vegas.

But Usman appeared to break Covington’s jaw with a strong right hand in the third round. Covington incredibly willed his way through it, in what turned into a down-and-dirty slugfest, only to lose in the fight’s 25th and final minute.

Usman, a Dallas resident by way of Nigeria, retained the title via TKO at 4:10 of the fifth round for his 15th consecutive victory.

He clinched it by flooring Covington twice in a span of eight seconds and then jumping on top to finish.

The evening’s co-feature bout saw the end of one great title reign and perhaps the start of another. Alexander Volkanovski (21-1) became the first Australian-born UFC title holder, as he lifted the featherweight championship from Hawaii’s Max Holloway (21-5).

Volkanovski’s was simultaneously patient and exacting, forward-moving but picking his spots, as he stymied Holloway’s wild style and slowly wore him down. The judges’ scores were 48-47, 48-47, and 50-45 for a unanimous decision. Volkanovski won his 18th straight fight, while Holloway had a string of 13 in a row at 145 pounds snapped.

While Nunes is known for her ferocious striking skills, her wrestling carried the day in a unanimous-decision victory. Nunes nearly finished de Randamie in the opening round, then de Randamie rebounded for a strong second, but Nunes shut her opponent down with grappling over the final 15 minutes. The judges’ scores were 49-44, 49-46, and 49-45, as Nunes won her 10th straight fight and defended her belt for the fifth straight time.