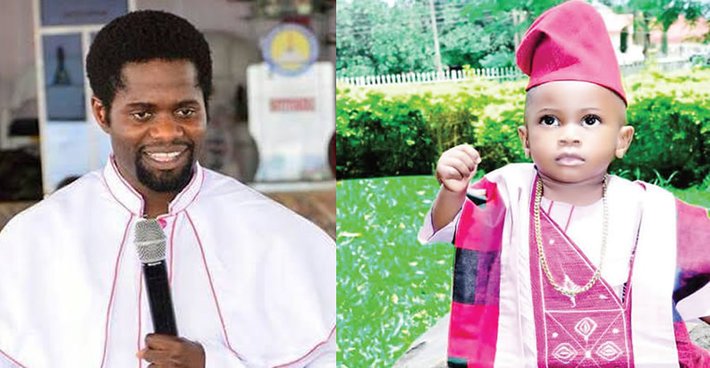 The Deji of Akure, Oba Aladetoyinbo Aladelusi, has clarified that his palace was not involved in the case of a one-year-old missing child, Gold Kolawole, on Nov. 10 at Sotitobire Miracle Centre, Akure.

Mr. Micheal Adeyeye, the Chief Press Secretary to the monarch, made this clarification in a statement issued to newsmen on Friday in Akure.

NAN recalls that no fewer than two persons were killed while fracas erupted at the worship centre on Wednesday when some irate youths set the church ablaze.

“The mob action, according to reports, was precipitated by a false news story to the effect that the remains of the boy alleged to have been kidnapped in the premises of the church has been exhumed from the church.

“Ordinarily, the palace would have refrained from commenting on the incident and allowed the law enforcement agents to do their job but for the rumour that trailed the mob action.

“This has necessitated the issuance of this statement to clear the air on the allegation of complicity by the palace in the unfortunate incident.

“It is on record that the parents of the missing child had protested to the Deji’s palace on Tuesday, November 12 seeking the intervention of the monarch.

“The Deji quickly intervened and constantly followed up on the case to ensure that justice is done by inviting the General Overseer of the church, the parents of the child and the teachers at the children’s section,” the statement read.

It added that Oba Aladelusi then urged the security agencies to carry out a thorough and discreet investigation in order to unravel the mystery surrounding the disappearance of the child and bring perpetrators to book.

According to the statement, it was, therefore, unreasonable, illogical and a total falsehood to allege the monarch of any complicity and any attempt to pervert the course of justice.

“This is an attempt to denigrate the revered stool of the Deji.

“It is laughable and barbaric that some faceless individuals also claim that His Majesty received a huge sum of money to push for the release of the cleric and also compromised the investigators.

“This remains a figment of the imagination of whoever is behind the rumour and we challenge anyone with such evidence to provide it,” it stated.

The statement deeply frowned at any attempt to bring the revered institution into disrepute by rumour mongers for any reasons.

It urged the good people of Akure kingdom and the public to disregard such satanic rumour from the faceless individuals.

“The Kabiyesi will not in any way be part of any attempt to prevent the law from taking its due course.

“As a man who believes in justice and equity, he will not be involved in any shady deals under any guise.

“It is, therefore, wrong for anyone to drag the Deji into such matter which is criminal in nature with the intent of disrupting investigation. This is malicious with no iota of truth.

“His Majesty is ever ready to support any move that will help to find the missing child, unravel the mystery and bring any person or group of persons involved to book.

“The palace wishes to enjoin the security agencies to expedite action on their investigation in the search of the child, as our confidence is unshaken in their ability to do justice without fear or favour,” the statement said.

It urged the people to refrain from making unsubstantiated allegations that could jeopardize the ongoing investigation but would only lead to unnecessary incitement.

“We are confident that evil cannot triumph over the good and our heartfelt sympathy and prayer remain with the family of the missing child,” the statement said.

Buhari @ 77: A man and his controversial legacy!