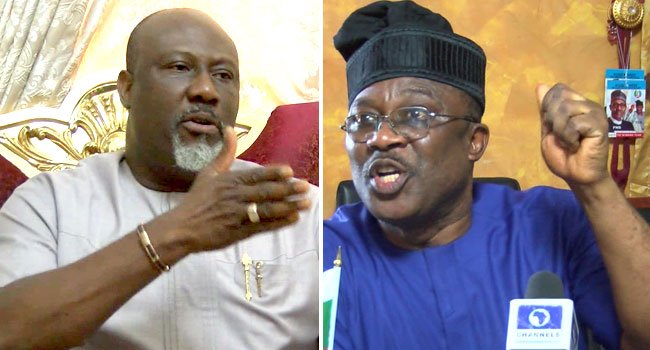 Senator Smart Adeyemi of the All Progressives Congress (APC) has begged President Muhammadu Buhari and former President Olusegun Obasanjo to forgive Senator Dino Melaye who he defeated at the polls.

Mr. Adeyemi who described Melaye’s time in the National Assembly as “disastrous” asked people who Mr. Melaye has offended to forgive him.

He was declared winner in the Court of Appeal, which ordered a rerun, after getting 88,373 votes to oust Melaye, who got 62,133 votes.

The senator was declared winner on Saturday by the Independent National Electoral Commission (INEC), following the conclusion of the supplementary poll.

The senator-elect promised to avoid any action that will tarnish the image of his constituency and the state.

He said although he brought Melaye into politics, his protégé unfortunately turned against him.

“I will bring development to my state and my constituency, by the grace of God. My victory shows that the people of Kogi West want progress and development. Dino never won any election in this state.”

Also, Mr. Melaye said he will challenge what he called Mr. Adeyemi’s “temporal and evaporative victory” at the tribunal.

In a statement on Sunday in Lokoja, Mr. Melaye stressed that “the victory attained by violence and fraud is tantamount to defeat… for it is momentary”.

The statement said: “It is not about Dino Melaye; it is about Nigeria and our electoral system. I stay the course… (it’s) not over yet.