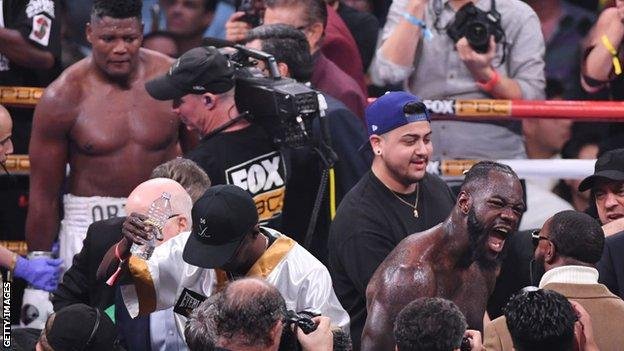 Deontay Wilder defended his WBC world heavyweight title for the 10th time with a stunning knockout after being out-boxed by Luis Ortiz for six rounds.

The American looked set to see his world-title reign end just short of five years as Ruiz picked him apart for half of their Las Vegas rematch.

But in the seventh round, Wilder’s devastating right hand left Ortiz stunned and beaten on the canvas.

Ortiz knocking Deontay Wilder around for a bit.

“I found my measurement, seen the shot and took it,” said Wilder, 34.

“We have Tyson Fury the rematch next. It’s set to be done in February so we will see how that goes and then after that I am looking for a unification bout.

“The heavyweight division is too small to have so many belts lingering around, there should be one champion and I think I am the perfect man for that job.”

Ortiz, 40, made it to his feet but could not beat the 10 count and was left with a look of shock on his face as Wilder had barely thrown a combination or landed a punch of significance.

The defeated Cuban was left beating the ropes with his fists in frustration after bamboozling Wilder with feints and footwork, while boxing at the kind of pace he looked capable of maintaining.

Deontay Wilder knocks Ortiz out in this thriller.

He found repeated joy from his tricky southpaw stance with the left hand and after landing on Wilder in the fourth, the champion beat his chest with both hands as he clearly knew he was second best.

Some will ask questions as to how flat Wilder looked for six rounds but he has built a reputation as one of the most destructive punchers in boxing history and his straight right hand thrilled those ringside at the MGM Grand.

With this success he moved level with Muhammad Ali in recording 10 straight title defences. Only Tommy Burns (11), Vitali Klitschko (11), Wladimir Klitschko (18), Larry Holmes (20) and Joe Louis (25) have managed to defend the heavyweight crown more times in a row.

His 42nd win in 43 bouts will also take Wilder past five years as world heavyweight champion having secured the title by beating Bermane Stiverne in January 2015.

Fury almost fell to the same power as Ortiz 12 rounds into his Los Angeles draw with Wilder in December. This latest knockout again adds to the mystery around how the Briton got to his feet.

If they do fight on the slated date of 22 February, Fury will get the chance to become a two-time world heavyweight champion.

His trainer Ben Davison was ringside to see Wilder keep hope of that fixture alive but this win once again underlined he holds the kind of ferocious power that ensures he can never be written off.

Madrid come back to win as Bale returns