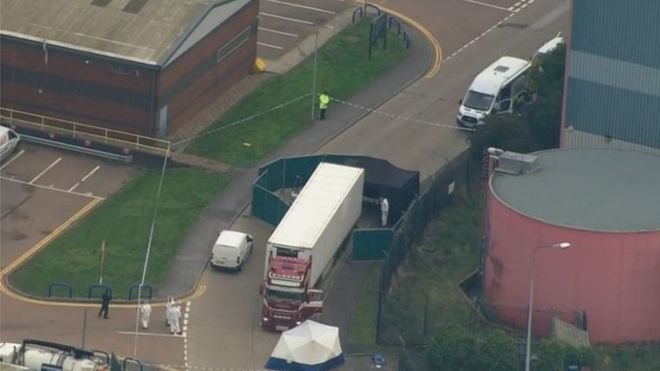 Vietnamese Police have arrested eight suspected traffickers as part of a crackdown on human trafficking launched following deaths of 39 migrants, whose bodies were found in a parked lorry in Essex, southern England in October.

The latest arrests in Vietnam were announced in the state media on Monday, bringing the total number of arrests in that country linked to the lorry tragedy to 10.

The identities of the suspects have not been released due to the sensitivity of the ongoing investigation.

However, the Police in the central Vietnamese province of Nghe An, believe the individuals are part of a brokering ring that illegally sends Vietnamese people to Britain, according to local newspaper VnExpress.

“Following the incident in the UK, some brokers have returned brokerage fees to families whose children have gone missing,’’ Nguyen Huu Cau, Director of the Nghe An Police Department, told Vietnamese media.

British Police discovered a parked lorry containing the victims’ bodies at an industrial estate in Essex, in south-east England, on Oct. 23.

The eight new arrests follow reports on Friday that Vietnamese Police had detained two others for their suspected involvement in the lorry deaths.

Their identities have also not been revealed.

As part of the broader crackdown, police in the central Vietnamese city of Hue have also detained two men and one woman on suspicion of attempting to smuggle people to the US.

A fourth person was jailed for trying to smuggle people to Taiwan.

It remains unknown whether these cases are linked to lorry deaths.

The alleged people smugglers were caught after a man paid them $36,000 to send his son to the US.

Weeks passed without progress on the son’s trip and the father complained to authorities after the men refused to give him a refund, VnExpress reported.

Late on Sunday, a Vietnamese Deputy Foreign Minister travelled to Britain to aid investigations into the lorry deaths, according to media reports.

The deputy minister will lead a delegation aimed at speeding up the identification process of the 39 victims.