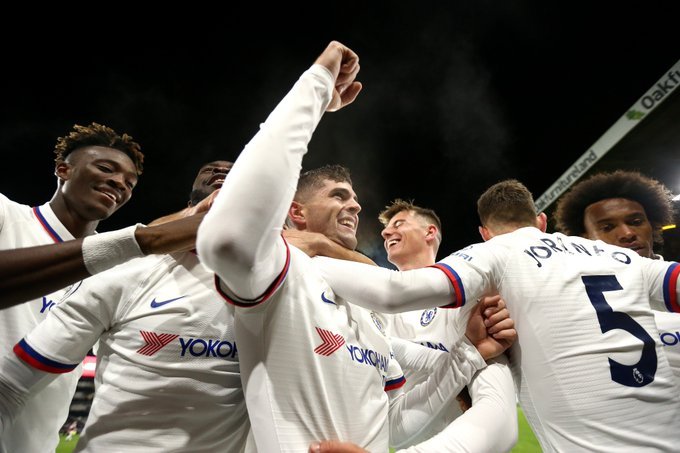 Christian Pulisic scored a hat-trick to announce his arrival in English football in sensational style as Chelsea beat Burnley for a seventh consecutive win in all competitions.

He was the difference in an even first half, first of all winning the ball on the halfway line before running all the way and slotting home.

His second was also a break from midfield after Willian won possession.

Burnley were in the game until that stage but Chelsea ran away with it in the second half.

Pulisic headed in from Mason Mount’s cross for his first career treble, before Willian blasted home a fourth moments later.

Jay Rodriguez’s long-range strike and Dwight McNeil’s deflected effort brought huge roars from the Turf Moor faithful but they had left their comeback far too late.

Pulisic, who has already been dubbed Captain America in some parts, has had a slow start to life in England as he adjusted from the switch from Borussia Dortmund.

This was his first Premier League start since August, but there can be little doubt he is ready now.

It was not just his goals which were impressive. He caused so many problems for Burnley with surging runs down both flanks and through the centre, as well as some testing crosses.

But what will clearly be remembered are his three goals.

His first was all his own work as he won it from Matthew Lowton before skipping past James Tarkowski and slotting home.

Then Willian stole the ball off a Burnley defender before finding Pulisic, who did the rest – albeit with the help of a deflection.

After the break, he popped up with an unlikely header to become only the second American to score a hat-trick in the Premier League.

Willian’s fierce drive into the bottom corner was merely a footnote on this game.

Chelsea’s fans chanted “we want 10” but the only other Chelsea action of note was a penalty awarded to Callum Hudson-Odoi which was overturned by the VAR, and which subsequently earned the substitute a yellow card for diving.