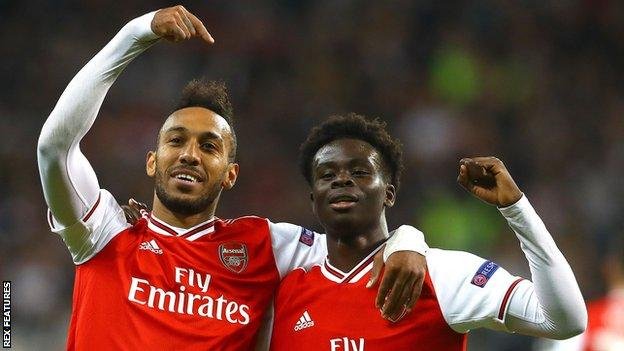 Willock put the Gunners in front with a deflected shot in the first half before Saka smashed in his first senior goal for the club in the 85th minute.

The Gunners had created further chances but also relied on goalkeeper Emiliano Martinez to come to the aid of their fragile defence.

The Argentine produced excellent low saves to deny Filip Kostic and Andre Silva in the first half.

The second period was frantic in front of a vociferous home crowd with Arsenal’s late goals only coming after Dominik Kohr was shown a second yellow card for a cynical foul.

The Gunners, beaten finalists in last year’s Europa League, are top of the early Group F table on goal difference after Standard Liege beat Vitoria in the night’s other game.

Manager Unai Emery opted for a mix of youth and experience for the game in Germany, despite it arguably being Arsenal’s toughest test in Group F, and it was their young players who stood out.

Eighteen-year-old Saka, playing for the first team for the first time this season and fifth time in total, was excellent on the left flank, scoring once and setting up the other two goals.

He created Willock’s goal by beating his marker with fine skill in midfield and was the main threat for the Gunners in the first half.

The only criticism was he spurned a number of chances to increase Arsenal’s lead but he silenced those doubts with an emphatic finish from the edge of the area late on.

Willock played as the Gunners most advanced central midfielder and offered a goal threat but also linked play well, notably with a fine driving run in the second half which ended with Martin Hinteregger excellently blocking an Aubameyang shot.

The scoreline flattered Arsenal in the end but the game will be most memorable for the performance of their youngsters.

The Gunners came into the game on the back of their disappointing 2-2 draw against Watford, after which their defensive display was heavily criticised as they spurned a two-goal lead.

Although Arsenal kept a second clean sheet of the season, they still looked uncertain at the back and allowed Eintracht 24 shots on goal – seven fewer than the Hornets’ 31 on Sunday.

Arsenal’s deeper midfielders Granit Xhaka and Lucas Torreira failed to control proceedings with the second half end-to-end until Kohr was dismissed.

Eintracht, who reached the semi-finals of the Europa League last season before losing on penalties to Chelsea, lost strikers Sebastien Haller and Luka Jovic to West Ham and Real Madrid respectively in the summer and had either been in their line-up on Thursday, Arsenal’s slack defence may have been punished.

Kostic caused right-back Calum Chambers significant problems but was wasteful, as was AC Milan loanee Silva, who shot well wide in the second half when given another good opportunity.

That said, Martinez, brought in for first-choice goalkeeper Bernd Leno, impressed with key saves in the first half and assured handling when called upon.

Meanwhile, Arsenal legend Ian Wright was very impressed with Saka’s performance that he acknowledged him on his Twitter account.