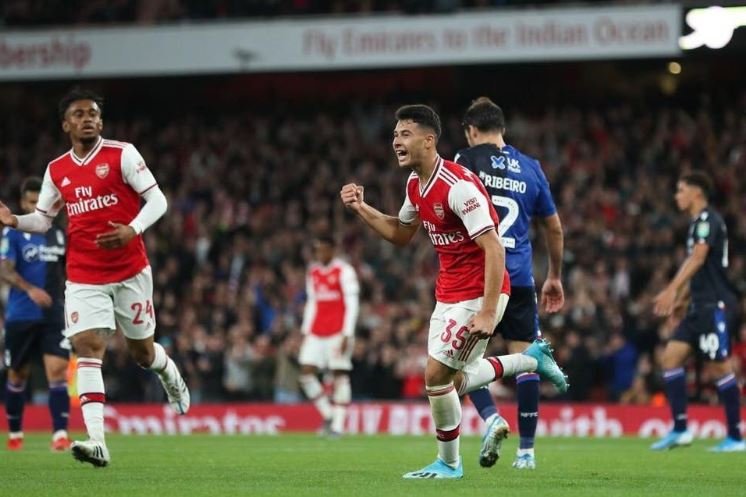 Unai Emery praised “fighter” Gabriel Martinelli for making the most of his opportunity after the teenage forward scored twice in Arsenal’s 5-0 Carabao Cup win against Nottingham Forest.

The 18-year-old summer signing made his first competitive start in the third-round game at the Emirates.

Martinelli opened the scoring with a powerful header before scoring a superb long-range second in injury time.

Just look what it meant to him! 😄 pic.twitter.com/4Dwl0F4FIm

“He’s hungry to have that opportunity to help us,” said Emery.

“He is very humble, he fights. I told him to have some patience for his opportunity to do like he was doing. He did that. He deserved it.”

Arsenal were playing only 48 hours after coming back to defeat Aston Villa 3-2 in the Premier League, but they put in a dominant display against their Championship opponents.

As well as Martinelli’s brace, Rob Holding marked his return from 10 months out through injury with a headed goal while Joe Willock and Reiss Nelson were also on the scoresheet.

Nottingham Forest, who like Arsenal made a raft of changes for the tie, barely troubled their opponents with their only shot on target a late Sammy Ameobi strike that was comfortably saved by Emiliano Martinez.

A big win was capped by the return from injury of defenders Holding and Hector Bellerin after lengthy spells on the sidelines while summer signing Kieran Tierney also made his long-waited debut after recovering from a groin issue.

Emery added: “Some different players gave us their performance and came back after injuries – Rob Holding, Kieran Tierney and Hector Bellerin. This was a good result, a good match, a good game.

Few fans had heard of Martinelli when he became Arsenal’s first signing of the summer, joining for £6m from Brazilian club Ituano in July.

However, back in his homeland he is viewed as having the potential to become one of Brazil’s superstars and he certainly impressed on his home debut for the Gunners.

The teenager, who made his Premier League debut with a late substitute appearance against Newcastle in Arsenal’s season opener, played futsal as a youngster and the close control and dribbling skills developed from that sport were on show against Forest.

His first goal also showed good strength and awareness as he attacked an excellent first-time ball by Calum Chambers to power home a header.

That strike made him the youngest player to score on their first start for Arsenal since Alex Oxlade-Chamberlain against Shrewsbury in September 2011.

But the best was yet to come. With the game deep into injury time, Martinelli received the ball 25 yards from goal, skipped one challenge before arrowing a wonderful strike into the top corner.

It is early days, but Martinelli showed plenty of potential to suggest he could become a hugely exciting talent for the Gunners.

“We were waiting and watching him, how he could improve with us,” added Emery.

“He played very well in pre-season, he was working each training with big spirit and performance.”

This was a fine display of attacking football from Arsenal but what will have been just as pleasing for their fans was the clean sheet.

Arsenal had conceded 10 goals in their last five Premier League fixtures and this game provided Unai Emery with the perfect opportunity to give some minutes to those returning from injury.

All eyes were on full-back Tierney as the £25m summer signing from Celtic made his debut after recovering from a groin problem, while centre-back Holding made his first start following 10 months out with a knee injury.

Holding’s goal will have gone a long way to helping him put recent injury woes behind him while Tierney put in a hugely impressive performance full of excellent crosses and surging runs down the left flank and he could now be in contention to face Manchester United in the Premier League on Monday.

The standing ovation he received on being substituted spoke for the fans’ appreciation and the applause continued for his replacement, Bellerin, who made his return to first-team action after nine months out with a knee injury and even managed to provide the assist for Willock’s goal.