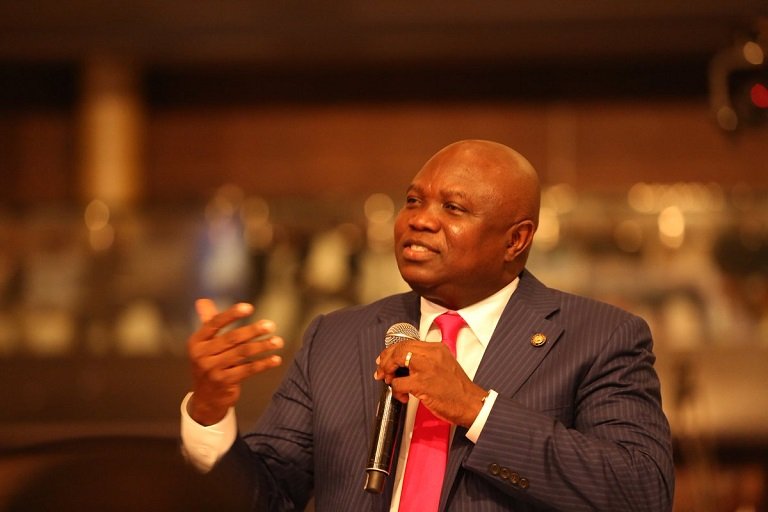 Some Economic and Financial Crimes Commission (EFCC) operatives are raiding the Epe residence of immediate past Lagos Governor Akinwumi Ambode.

According to online medium, TheCable, the raid has been confirmed by EFCC spokesman, Tony Orilade.

Justice Chuka Obiozor had earlier granted EFCC’s ex-parte application to freeze two bank accounts pending conclusion of investigation and possible prosecution of the Permanent Secretary in the Office of the Chief of Staff to the Governor, Adewale Adesanya.

EFCC investigator, Kungmi Daniel, said the commission discovered huge inflow of N9,927,714,443.29 from the state accounts into the FCMB account.

He said the account, operated by Adesanya, was opened last September 17 during the Akinwunmi Ambode administration.

But the former governor had since dismissed claims that he had bank accounts that contained N9.9bn.

In a statement on 9 August released on his behalf by his media aide, Habib Aruna, Ambode said while he did not intend to join issues with the anti-corruption agency at this time especially as there has been no communication between him and the commission on this issue, it is pertinent to clarify what he believed was a misleading import of the press statement on Tuesday.

According to the former governor, the accounts in question that were frozen by the Federal High Court belong to the Lagos State Government and not him or any individual.

“Those accounts were opened in the course of normal operations by the Lagos State Government for its administrative purposes and not for the former Governor’s personal transactions as was being wrongly insinuated and have been operated to ensure smooth operations of government activities by previous and present administrations.

“The former Governor was not and will never be involved in any unauthorized use of government property and resources.

“We strongly believe that after four demanding years as Chief Executive of Lagos State, Mr. Ambode is entitled to some deserved rest with his family and loved ones without the unwarranted attacks on his well-earned reputation.”