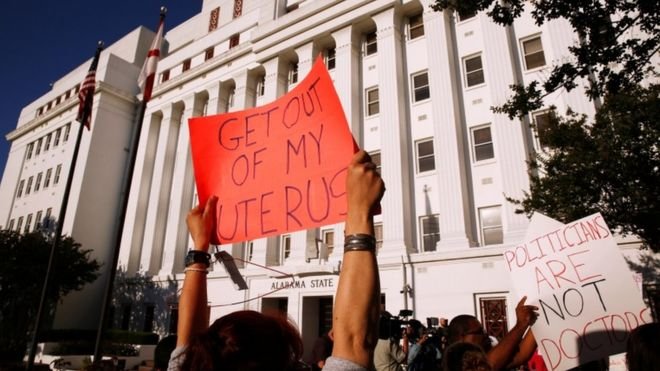 Alabama lawmakers have passed a bill to outlaw abortion outright in the state, set to be the strictest such US law.

The state Senate approved the law by 25 votes to six, rejecting exemptions for cases of rape or incest.

It will now go to Republican Governor Kay Ivey. She has not said whether she will sign it, but she is seen as a strong opponent of abortion.

Activists hope it will challenge a landmark 1973 Supreme Court ruling that legalised abortion in the US.

The bill had been passed 74-3 earlier this month in Alabama’s House of Representatives.

Abortion would only be allowed in certain circumstances to safeguard the mother’s health.

The National Organization for Women called the ban “unconstitutional” and said it was “a transparent effort to drum up political support for anti-abortion candidates in upcoming elections”.

Staci Fox of Planned Parenthood Southeast Advocates called the decision “a dark day for women in Alabama and across this country”.

In a statement she said Alabama politicians would “forever live in infamy for this vote and we will make sure that every woman knows who to hold accountable”.

What politicians in Alabama say about the new law

Republican lawmaker Terri Collins, sponsor of the legislation, said: “Our bill says that baby in the womb is a person.”

Democratic state Senator Bobby Singleton said the bill “criminalises doctors” and is an attempt by men “to tell women what to do with their bodies”.

Republican Senator Clyde Chambliss, a backer of the law, said it would enable the state “to go directly to the Supreme Court to challenge Roe versus Wade”, the 1973 ruling that established a woman’s right to an abortion.

Before the debate began, Democrat Rodger Smitherman said: “We’re telling a 12-year-old girl who, through incest and rape is pregnant, we are telling her that she doesn’t have a choice.”

What does the bill do?

It goes further than legislation passed recently elsewhere in the US to ban abortion after a foetal heartbeat can be detected, usually around six weeks into a pregnancy.

Under the Alabama measure, provision of abortion at any stage in pregnancy would be a class A felony.

Doctors could face 10 years in prison for attempting to terminate a pregnancy and 99 years for actually carrying out the procedure.

A woman who has an abortion would not be held criminally liable.

The bill would allow abortion in cases where the mother’s life is at serious risk.

Related Topics:Abortion bill
Up Next