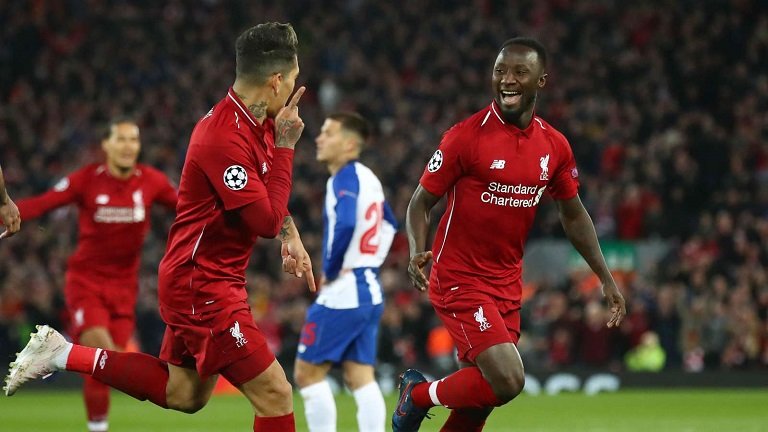 Naby Keita and Roberto Firmino were on target as Liverpool eased to a 2-0 win in the first leg of their Champions League quarter-final against Porto.

The Portuguese champions had revenge on the mind after being dumped out by Jurgen Klopp’s side in the last 16 of last year’s competition but a disappointing first-half performance has given them an almighty task in next week’s return fixture at the Estadio do Dragao.

Keita’s second goal in less than a week got the Reds up and running after just five minutes before Firmino added a simple second in the 26th minute.

Liverpool did most of the pressing in the second half – Sadio Mane coming closest from long range – but they were unable to find a third that would have all but ended the tie as a contest.

Klopp’s side started in typically pulsating fashion, powering into an early lead when Keita’s low effort from 15 yards was heavily deflected past Iker Casillas by the flailing Oliver Torres.

Mohamed Salah then clipped past Casillas’ left-hand post when it looked easier to score after 22 minutes.

His blushes were spared four minutes later, however, when Firmino tapped into an empty net from five yards after he had been picked out by Trent Alexander-Arnold’s low cross.

Moussa Marega should have pulled Porto back into it shortly after the half-hour mark but his low effort was kept out by the left foot of Alisson.

Mane – whose earlier volley had been ruled out for offside – curled narrowly past Casillas’ left-hand post from the edge of the penalty area 20 minutes from time.

Salah was lucky not to be shown a red card for an ugly challenge on Danilo Pereira in the closing stages as Porto – who again came close through Marega – ultimately fell short of finding an away goal that would have changed the complexion of next week’s second leg.