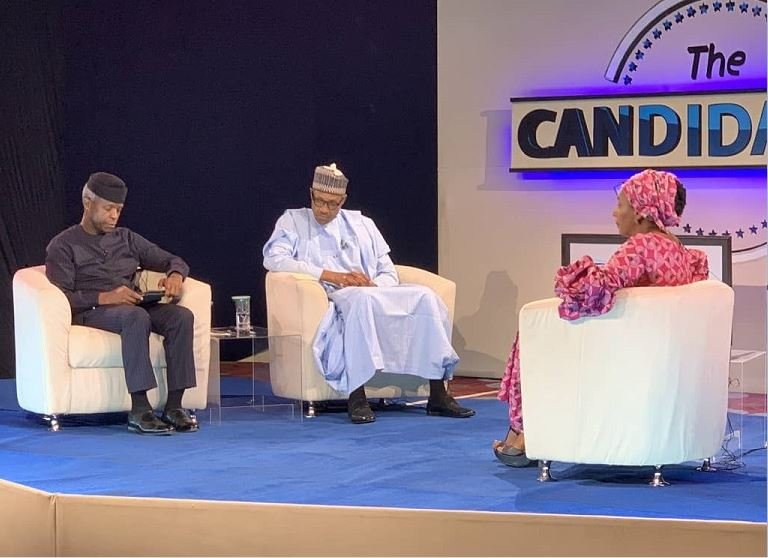 The APC Presidential Campaign Council has offered explanations as to why President Muhammadu Buhari didn’t attend the 2019 presidential debate on Saturday.

APC PCC said Buhari has two campaign rallies across the country and could not attend the NEDG/BON organised debate.

In a statement by Festus Keyamo, spokesperson of Buhari’s campaign council the President has proven he can debate.

“The President and Commander-in-Chief of the Armed Forces of the Federal Republic of Nigeria could not attend the presidential debate organised by the Nigeria Election Debate Group and the Broadcasting Organisations of Nigeria which held today, Saturday, January 19, 2019 for the following reasons:

“Firstly, out of several opportunities afforded our candidate to interact with the Nigerian people directly by different organisations, our presidential candidate has taken full advantage of another town-hall meeting organized by another group which held on Wednesday, January 16, 2019.

“He was also joined at that town-hall meeting by our Vice Presidential candidate who is also the Vice President of the Federal Republic of Nigeria, Professor Yemi Osinbajo, SAN.

“Nigerians from all walks of life who were physically present and through online platforms asked uncensored questions which were adequately answered. It was also transmitted live by various broadcast networks in Nigeria.

“In addition, the busy and hectic official and campaign schedules of Mr. President clashed with this programme.

“Today, Mr. President commissioned the Baro Inland Water Port in Niger State and campaigned in Niger and Plateau States where his time was over-stretched by the tumultuous and mammoth crowds in both States, (as seen by Nigerians on live television) and only returned to Abuja late this evening.

“Whilst we thank the organisers for the invitation, we want to assure Nigerians that we shall continue to hold these debate groups and Nigerians in high esteem which our candidate has demonstrated during past election debates when he honoured similar invitations.

“Nigerians will also recall that a few weeks ago, our Vice Presidential candidate, Prof. Yemi Osinbajo, also attended the debate organized by the same organisations.

Lastly, we note the statement of the candidate of the PDP, Alhaji Atiku Abubakar who actually came for the event and left the venue when he did not see Mr. President, who is our candidate.

“According to him, he would not want to “attack” Mr. President in his absence.

“It should now be obvious to Nigerians that for Alhaji Atiku Abubakar and the PDP, this election is all about attacking the person and programmes of Mr. President and not about proffering their own solutions to the problems they created during their sixteen years of misrule, maladministration and looting of the nation’s resources.

“When they cannot see President Buhari to attack, the content of their campaign becomes hollow, empty and “full of sound and fury, signifying nothing”, Keyamo said.

“Now that Atiku Abubakar had a unique opportunity to explain to Nigerians his own vision and mission without a President Buhari in the picture, he ran away.

“Afterall, he has his own eight years of crass and grand corruption as Vice President to defend before the Nigerian people.

“On February 16, 2019 we urge Nigerians to demonstrate to Alhaji Atiku Abubakar and the PDP, through their votes, how empty indeed their campaign has always been and to vote massively for President Muhammadu Buhari and Prof. Yemi Osinbajo, SAN who have started the rebuilding process of our great nation.”