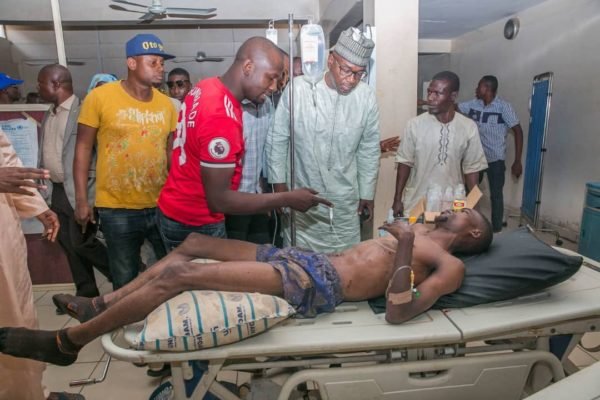 The All Progressives Congress governorship candidate in Kwara, Abdulrahman Abdulrazak, was spirited away from a rally in Ilorin on Sunday after suspected PDP thugs fired bullets into the crowd.

Nigerian Police Force confirmed the attack in a statement by spokesman, Jimoh Moshood, affirming that PDP thugs went on the rampage in Ilorin, Kwara and disrupted a rally being held by the All Progressives Congress.

This was contrary to the impression created by Senate President Bukola Saraki on Friday that it was the APC members that were attacking his family home and supporters.

“As we speak, the situation report from Kwara State Police Command was that the APC holding a Governorship campaign rally at Agbaji in Ilorin came under a sudden attack by suspected PDP thugs, who disrupted the rally, damaged five vehicles and some Keke Napep and wounded two innocent people”, police spokesman Jimoh Moshood said.

“The family house of the Senate President was not attacked as being peddled in some social media”, Moshood added.

The APC governorship candidate, Abdulrahman Abdulrazak confirmed the attack on the party’s rally, but he gave a different location.

“Today’s attack on us during our rally in Ode Alfa Nda shouldn’t shake us rather we should see it as one of the last attempts of a drowning dynasty to stay alive by clutching at anything including violence. Their time is up, they just don’t know it yet”, Abdulrazak tweeted, along with photographs of some of the vehicles damaged during the attack.

According to The Nation, there was also another attack on APC supporters in Ile Aiyelabegan, a short distance from the Agbaji homestead of the Senate President Bukola Saraki.

Senator Saraki at a press conference in Abuja on Friday raised concern over his safety, his family and those of his political supporters.

He claimed that the police have continued to show hostility to him and his supporters as part of efforts to jeopardise and undermine his personal security and that of his immediate and larger family.

He cited three incidents to illustrate his fear about his security. One of them was the allegation that on Thursday, some supporters and thugs of the APC attacked PDP supporters at Adewole/Adeta, Ilorin, who were holding their weekly ward meetings.

He claimed that the same thugs went to his family quarters in Agbaji in Ilorin and vandalised houses, shops and inflicted machete wounds on three persons.

“All these destructions took place in the presence of policemen who came with them but watched without any care, as the APC thugs and supporters unleashed violence on our people.

But in a rebuttal, repeated Sunday, the police said all the allegations of the Senate President “are incorrect, misleading and false and should be disregarded and discountenanced by the general Public”.

Our military heroes will never be forgotten – Osinbajo