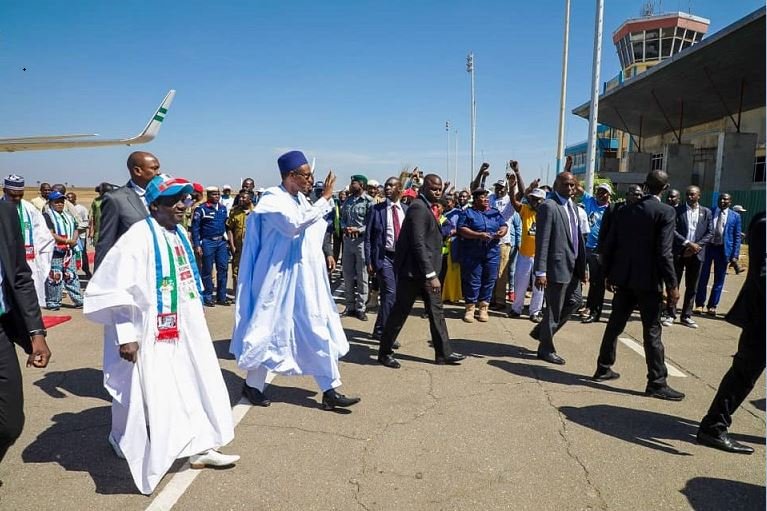 President Muhammadu Buhari will not be attending the presidential campaign organised by BON on Saturday 19 January instead he will be campaigning in Jos, Plateau capital.

A source close to the Presidency told Chronicle NG that the president will not participate in the campaign, adding that, the President has nothing new to prove.

“He was at The Candidates with Vice President Yemi Osinbajo and they gave a good account of themselves.

“The President has also attended debates in the past and has proven beyond doubt that he is ready to serve Nigeria.

Meanwhile, President Buhari on Saturday arrived Jos, capital of Plateau, in continuation of his nationwide Presidential Campaign rally on the platform of the All Progressives Congress (APC).

NAN reports that the aircraft conveying the President and some members of his entourage landed at the Yakubu Gowon Airport, Jos at about 1.35 p.m.

The president had earlier, before departing to Plateau, inaugurated the Baro Inland Water Port and addressed APC presidential campaign rally all in Minna, Niger.

Governor Simon Lalong of Plateau and his deputy led a large number of supporters of APC to welcome the President and his entourage at the Yakubu Gowon Airport, Jos.

Buhari is expected to pay a courtesy visit on the Gbong Gwom Jos, Jacob Gyang Buba before addressing the mammoth crowd of APC supporters at the Rampam Township Stadium.

NAN reports that the president will also receive thousands of defectors from other political parties to APC.