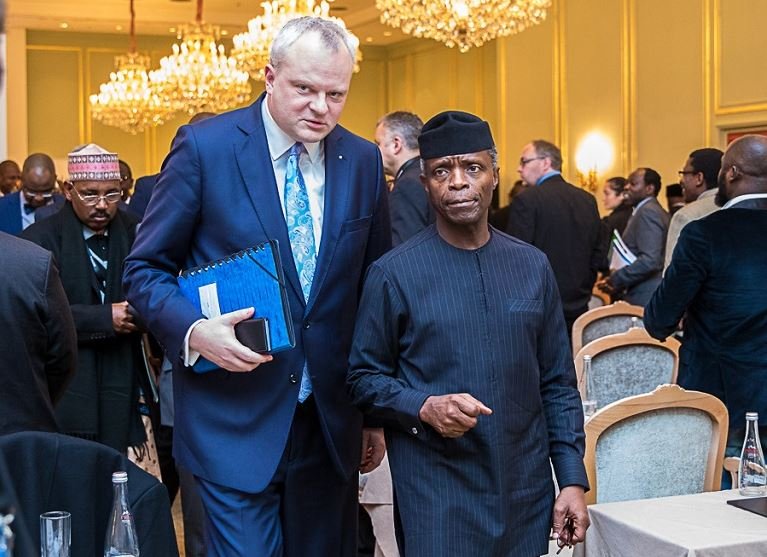 Vice President Yemi Osinbajo told German investors Nigeria is a leading investment destination for potential and serious investors, and the business opportunities are abundant and increasing.

At the first Nigeria-German Business Dialogue in Germany, the Vice President spoke on the abundant investment opportunities available in Nigeria, as the special guest at the well attended forum with German investors, international business people and diplomats  at the Adlon Kempinski Hotel in Berlin.

According to him, “Given the economic and trading developments in other parts of the world, Nigeria has become an investment destination of choice.”

Referencing a recent McKinsey report, the VP pointed out that, “consumer spending in Africa was $1.4 trillion by 2015, with Nigeria, Egypt and South Africa accounting for more than half of that total. There is also increasing economic opportunities in Nigeria because of deliberate actions by our government to diversify the economy and improve the business environment.”

While applauding the existing relations between Nigeria and Germany, the Vice President noted that Nigeria is a natural partner of Germany, which is also the largest economy in the European Union, and also its most populous country.

He said, “Both countries are potential locomotives of growth, trade and investment between Africa and Europe, and this is undoubtedly why there have been a significant exchange of high-level visits between both countries, including, most recently, the visit to Nigeria by Chancellor Angela Merkel at the end of August earlier this year.

“It is encouraging that there are significant economic ties between Nigeria and Germany. Germany is a significant exporter to Nigeria, which is its second largest trading partner in Africa. Recent reports show that German investment in Nigeria contributes as much as $1 billion in turnover annually.

“This is good, but we must agree that there is scope for even deeper collaboration given that Nigeria’s GDP is close to $500bn.”

The Vice President told the gathering that the various investment opportunities strengthen the resolve of the Buhari presidency’s strong commitment to the diversification policy; because of abundant untapped resources in some critical sectors of the economy such as agriculture, mining and technology.

Citing areas investors could tap into, Prof. Osinbajo remarked that, “agriculture perhaps presents one of the best investment opportunities in Nigeria. Only three years ago we were importing 5 million dollars worth of rice daily. Today we produce locally 10 million metric tonnes of paddy rice annually. And we are importing only two percent of our rice consumption now.”

“Carlos Farms, a Mexican fruit and vegetable investor, had initially planned to grow bananas and pineapples for export; until he discovered that he was making more money selling his bananas locally at $3 dollars a kilogramme, for what he would have been paid only a dollar per kg in Europe.”

“With a substantial percentage of the world’s arable land and over half of that uncultivated, it is becoming clearer that the world will be looking to Africa, and Nigeria in particular, as its food basket. Just to take China’s demand alone, China has 27% of the world’s population, but only 7% of the worlds arable land for agriculture. China needs 2 million tonnes of hybrid Soya beans per annum for livestock feed and vegetable oil. But we have not met that demand.”

The Vice President added, “Sesame seed is also in high demand; about 2m tonnes per annum is the demand from China, Vietnam, Japan and Arab countries (Sesame seed oil and the cake are used for confectionaries). That demand is largely unmet. China also requires over 2.3m tonnes of cassava chips and cassava products for industrial starch and ethanol.”

Prof. Osinbajo also stressed that, “Africa has also not been able to meet China’s demand for cocoa.  How about goat meat? 120,000 carcasses of goat meat are required weekly in different Arab countries. There is still a major gap in supply here as well. Most of Vietnam’s demand for over 2.5 million tons of cashew is unmet.”

“So, Nigeria’s role as food provider to the world and, especially in the next few decades, is clear. It is difficult not to be tremendously successful as an investor in agriculture in Nigeria. At the same time, major business groupings are making serious investments across the agricultural value chain; in rice milling, animal feeds and fertilizer production, amongst other things.”

The Vice President also pointed out that diversification of the Nigerian economy is also reflected in the manufacturing sector, in mining and oil and gas. According to him, “Our plans for manufacturing are based on ensuring that the sector can source its inputs and materials locally where possible, but also through imports when necessary, including by ensuring that the sector has access to foreign exchange.”

“A number of Special Economic Zones are being built in Lekki (Lagos State), Aba (Abia State) and Kano, which will serve as hubs for manufacturing activity, while Small and Medium Enterprises will be linked to them through a deepening of the manufacturing value chain.”

On the huge investment in the mining sector, Prof. Osinbajo observed that the sector, “which has suffered great neglect with the advent of the oil boom is being revived.  One heart-warming development is that with the priority given to the revitalization of the mining sector, a nickel deposit was found in Kaduna State which has been described as ‘world class and highly unusual’.

He further stated that “we are also diversifying within oil”, while adding that Nigeria is already exporting urea since it is producing more than enough for its domestic needs and in the very near future.

“Thanks to the Dangote Group, we expect to have an additional petrol refining capacity of 650,000 barrels a day alongside one of the largest petrochemical facilities in the world,” Prof. Osinbajo noted.

The Vice President also availed investors of opportunities in the service sector, with particular reference to the hospitality sector and budding tourism industries.

He stated that, “about 1.8 million international travellers spend two nights on average at Nigeria’s estimated 10,000 hotel rooms yearly. This generated about US$210 million in revenue for the industry in 2017, which barely reflects on Nigeria’s US$500 billion GDP size.”

“Nigeria’s hotel industry alone is projected to grow by double digits by 2020, as the sector bounces back post-recession to one of the fastest growing in the world, and the possibilities for investors is significant,” he stressed.

Investors who spoke earlier expressed delight and confidence in the growth capacity of the Nigerian economy and the ongoing impact of the economic blueprint of the Buhari administration. The Chairman of the German-African Business Association, Dr Stefan Liebing, acknowledged the huge investment potential of Nigeria and hoped for improved relations between the two countries.