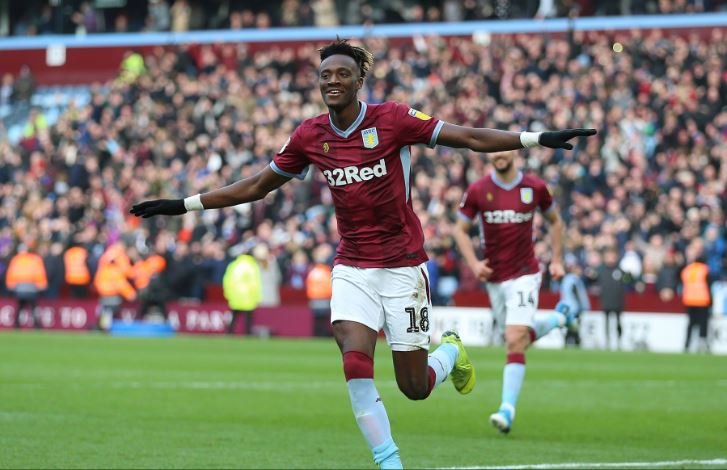 Tammy Abraham scored four times for Aston Villa in a 10-goal thriller but they could only draw against 10-man Nottingham Forest.

Forest had led 2-0 and 3-2 in the first half through Lewis Grabban, Joao Carvalho and Matthew Cash’s goals but Abraham’s first-half treble put Villa level at half-time.

Joe Lolley’s long-range hit restored the visitors’ lead shortly after the break, before Tobias Figueiredo was sent off and Abraham capitalised, heading in from Jack Grealish’s free-kick to make it 4-4.

Villa then took the lead for the first time when Anwar El Ghazi curled in, but Grabban’s near-post finish earned Forest a remarkable late point.

At the end of a breathless encounter, the two sides remained three points apart in the Championship table, with eighth-placed Villa still unbeaten at home since Dean Smith’s arrival on 10 October.

For 21-year-old Chelsea loanee Abraham, who has now scored six goals in his past three games, his hat-trick – which came in the space of 25 first-half minutes – was his first in senior football.

Before that, Forest had started brilliantly, with two goals in the opening six minutes, as Grabban tapped home and Carvalho slotted in from Lolley’s good ball.

Then Abraham netted twice in three minutes to quickly make it 2-2, heading home his first before the second hit him on its way in.

Cash then raced through an out-of-sorts Villa defence to make it 3-2 but Abraham hit back from the spot after Yannick Bolasie was brought down by Jack Robinson.

After Lolley’s strike, Figueiredo was dismissed for a bad foul on John McGinn – with Abraham’s fourth and then El Ghazi giving Villa the lead for the first time in the match with 15 minutes to play,

But Grabban’s equaliser moved Forest up to sixth in the table, as Derby dropped out of the play-off places as they lost at Stoke.

But conceding goals had not previously been something visitors Forest were known for – Aitor Karanka’s men arrived at Villa Park on a run of three consecutive clean sheets.

Yet the Reds, who led three times in the game, missed the chance to move within three points of the automatic promotion places.

Villa, whose confidence levels appear to have soared since Smith’s arrival from Brentford, have taken 13 points from a possible 21 since he took charge.