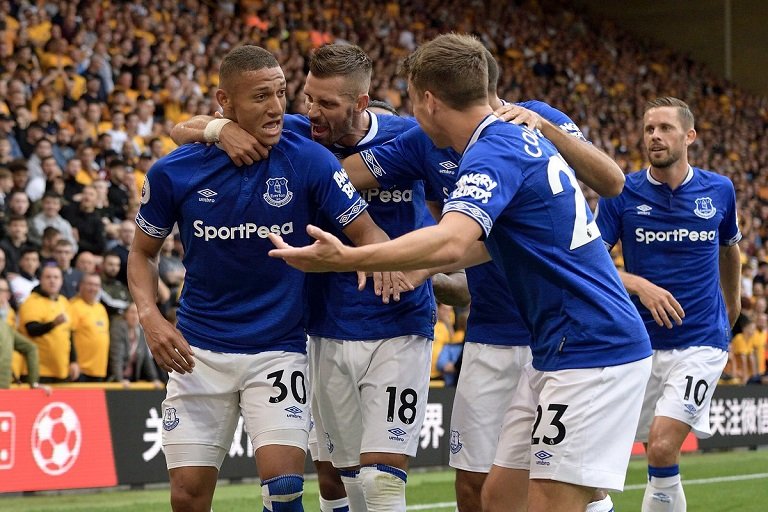 Richarlison scored twice on his debut but 10-man Everton were left frustrated as Wolves claimed a point on their Premier League return.

The Brazilian winger stabbed home his first from close range, before stroking in a delightful second.

The Toffees had been in control for the opening 40 minutes, but skipper Phil Jagielka was sent off for a dangerous challenge on Diogo Jota.

Wolves levelled at 1-1 from the resulting free-kick with midfielder Ruben Neves curling into the top corner from the edge of the box.

Raul Jimenez struck straight at Jordan Pickford from close range in the second half, but the on-loan Mexican made amends by burying a header with 10 minutes remaining from Neves’ cross.

New Everton boss Marco Silva told BBC Sport: “I don’t have doubts. Even when Richarlison doesn’t score he works really hard to help his team. I’m sure the fans will be proud of him.

“He did very well. He worked hard, which is what I expect from him.”

Richarlison said he was “happy” and would remember the day “the rest of my life”.

Silva was linked with a move to Goodison Park last season but Everton appointed Sam Allardyce instead, who oversaw an eighth-place finish.

Silva was sacked by Watford in January with the Hornets blaming Everton’s interest for a downturn in form. The Toffees finally got their man this summer after dismissing Allardyce.

The Portuguese’s first signing was Richarlison from his former club and much was made about the potential £50m fee, particularly having not scored for Watford since last November.

But it looks to be a shrewd move by Silva to link up again with the 21-year-old, who displayed his qualities inside and outside the box.

Playing from the left, he posed a dangerous threat to Wolves wing-back Matt Doherty and his 13 sprints during his 86 minutes on the pitch was bettered only by team-mate Seamus Coleman (15).

Richarlison opened the scoring with a opportunistic strike as Wolves failed to clear a Leighton Baines free-kick into the box, while his second was a measured finish into the far corner.

He also came close to making a goal when his knockdown fell nicely in the box for Theo Walcott, but the former Arsenal man’s scuffed shot failed to threaten Rui Patricio.

Richarlison added: “I have to thank my colleagues because we had to run double with one player less, so it is a special day for me.”

Everton would have been in a better position to claim all three points had Jagielka not been dismissed after losing control of the ball deep in his own half and catching Jota on the shin in trying recover possession.

“Phil Jagielka’s red card was a harsh decision,” said Silva. “Not only the red card but they scored from the free-kick.”

Related Topics:Jordan Pickford
Up Next