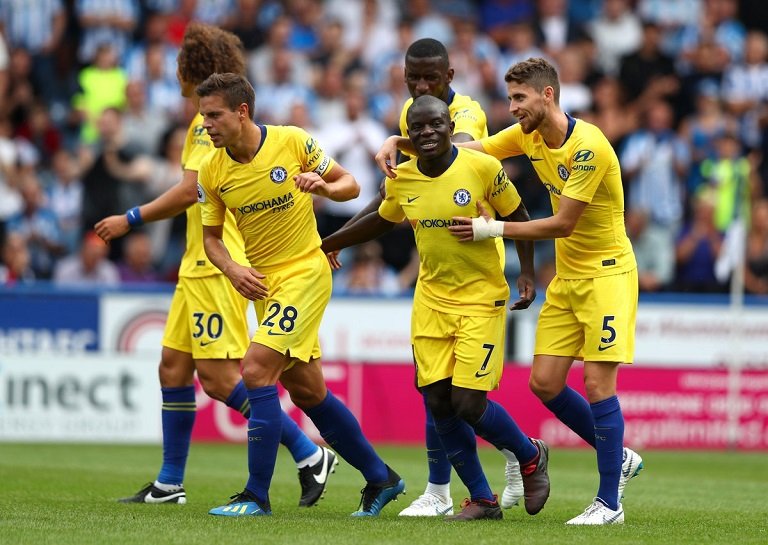 New Chelsea manager Maurizio Sarri warned it could take his new side two months to reach their potential, despite starting the season with a comfortable win at Huddersfield Town.

A volley from N’Golo Kante, a penalty from debutant Jorginho and a late third from Pedro gave Sarri’s team the ideal start to their league campaign.

Eden Hazard and Olivier Giroud were among the substitutes after their World Cup involvement.

“The situation until now has been very difficult,” said Sarri, whose side lost 2-0 to Manchester City in the Community Shield on Sunday.

“On Monday four players from the World Cup arrived [in training]. And then on Tuesday another two, so it’s not been easy for me at the moment.”

Asked how long it would be before they were playing at their best, the former Napoli manager answered: “It depends on me and the players. I don’t know. Hopefully two months and not three.

Chelsea opted for a 4-3-3 formation, in contrast to the three centre-halves and wing-backs system used by former boss Antonio Conte.

Sarri, who became the club’s 10th full-time manager in 10 years after Conte was sacked in the summer, saw his side take the lead with their first shot on target.

It came in the 34th minute when Kante’s mis-hit strike from Willian’s cross bounced past Huddersfield goalkeeper Ben Hamer.

Jorginho followed Sarri from Napoli to Chelsea in the summer and the midfielder doubled the Blues’ lead when he converted a penalty after Christopher Schindler fouled Marcos Alonso.

Pedro sealed a comfortable win with a cool, chipped finish after being played in by substitute Hazard.

Before the second goal, the Terriers had hit a post through Steve Mounie’s header, but it was to be Sarri’s and Chelsea’s day.

A good day for the new boss

Chelsea’s fifth-placed finish in 2017-18 and the resulting failure to secure Champions League qualification saw Conte get sacked in July, despite winning the Premier League in 2016-17 and lifting the FA Cup last season.

Sarri, 59, was chosen to replace him after guiding Napoli to second place in Serie A last season, although he had warned Chelsea’s fans to “expect some problems” in their opening games and that it would take three months to find their best form.

They were not at their best against Huddersfield, but were still far too good for David Wagner’s side.

After a slow start, Kante, who helped France win the World Cup less than a month ago, gave Chelsea the lead, and it became 2-0 when Jorginho calmly converted the penalty.

That goal, just before half time, changed the game and Huddersfield struggled to create chances and gain possession in the second half.

An acrobatic effort from Alonso hit the crossbar and, as the hosts pushed for a way back into the game, they were caught on the break when Hazard set up Pedro, who sealed the victory.

Osinbajo baffled that clerics are not supporting anti-corruption war