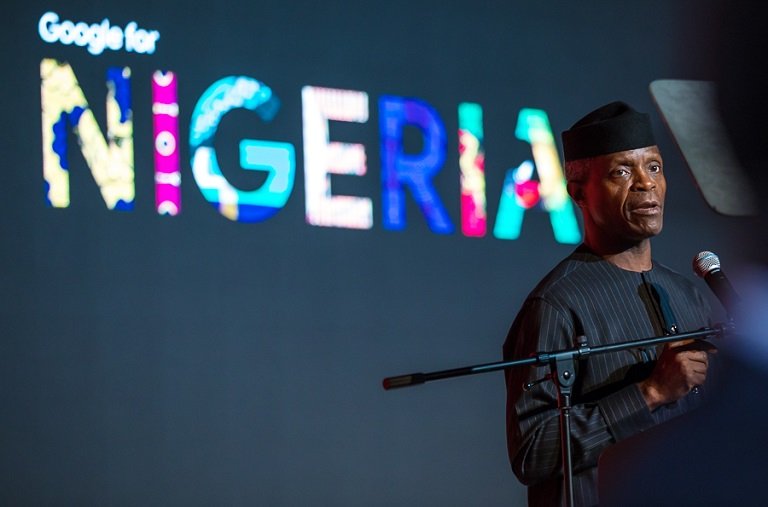 Vice President Yemi Osinbajo has declared that this is Africa’s century and it’s fortunes will play the defining role in global development.

Speaking at the launch of Google Station in Nigeria, he said Nigeria cannot train nearly 200 million young people by 2045, in classrooms alone, stressing the need for technology and internet.

At the event held in Lekki, Lagos, Osinbajo noted that, “the great purveyors of technology such as our hosts today Google, and their collaborators – 21st Century Technologies Limited and Backbone Connectivity Network (BCN), are not mere corporations in search of profit and some social good, they literarily hold the future of generations of humanity in their hands.

Veep noted that without connectivity, the development trajectory of Nigeria nation and Africa is truncated.

“Today, it is also becoming increasingly clear that the availability of food and healthcare for the huge numbers of our people will depend on how democratized the technology becomes.

“We simply cannot provide enough food, drugs or vaccines in Africa without the availability of innovation in agriculture, and technology in farming and the production of drugs and vaccines.

“So democratizing Artificial Intelligence as we heard Marvin Chow, Google’s VP Product Marketing, describe in agriculture and the medical sciences, will change the human development story.

“Indeed every step that is taken to democratize technology is a quantum leap in the African development story and a major contribution to Global stability and growth.

“This is why the launch of Google Station here in Nigeria, is an enormously significant event.

He added that Google and 21st Century will be providing free WiFi access in many public spaces in Nigeria, more exciting is that more of our markets will benefit from this free internet access.

“This partnership is particularly important to us, because we have in the past one year, in our energizing markets project, been providing solar power to markets and economic clusters across the country.

“We have done extensive work in Ariaria market in Aba, Sabongari in Kano, Gbagi market in Ibadan, Sura here in Lagos, and we are starting out in Iponri, and Balogun markets.

“But the most profound implication is that internet access is becoming available to some of the poorest in society.

“What access to information, tools of education, business or commerce means is that gaps of inequality and exclusion are bridged.

“Jobs are created and in many important respects, there is a real chance of better quality of life for large numbers of our people.

He said millions of Nigerians have personal stories of how the internet has transformed their lives, their hustle, as today’s theme alludes to, in positive ways.

Adding that Juliet Ehimuan, Google Country Director Nigeria, showed stories of real people like Adaobi, how Google has featured prominently in many of these stories.

We have since surpassed those numbers and trained over a million Nigerians in basic digital skills in the last 24 months.

To scale up our support to private sector players in the technology space, I recently inaugurated the Technology and Creative Advisory Group, a subset of our National Industrial Policy and Competitiveness Advisory Council.