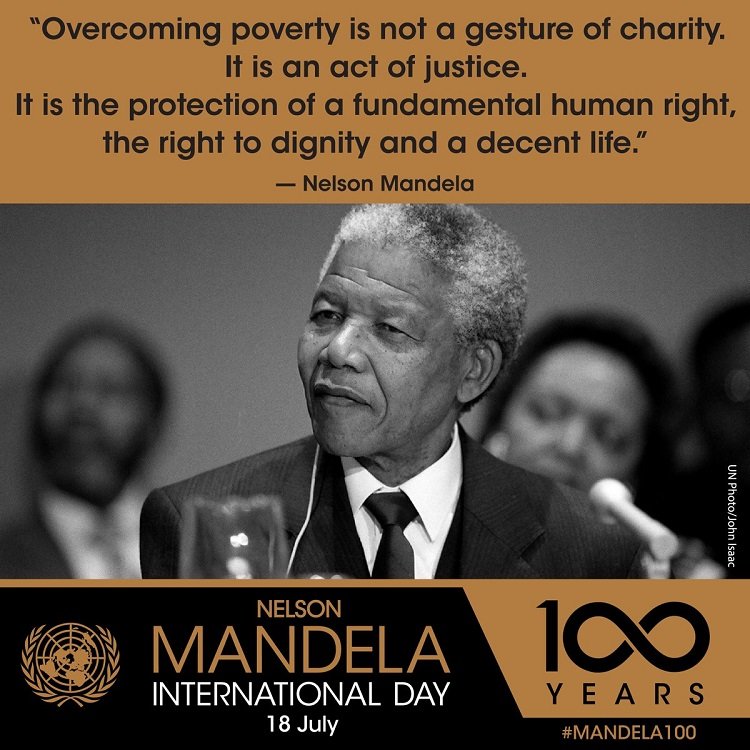 The UN is to mark the 100th anniversary of former South African President Nelson Mandela in recognition for his global contribution to the culture of peace and freedom.

The UN would use the occasion on Wednesday to take stock of what it termed Mandela’s vast legacy for mankind.

The Day is annually observed on July 18, which was inaugurated by UN General Assembly in November 2009, in recognition of Mandela’s global contribution to the culture of peace and freedom.

I was fortunate to meet Nelson Mandela many times and was always impressed by his wisdom and compassion. Madiba showed us that values such as forgiveness, respect and service are not just words but concrete actions we can all take. #Mandela100 pic.twitter.com/xpaZCjTFza

Mandela, who died in 2013, was the first democratically-elected president of South Africa and the country’s first black head of State, after he had been in prison for 27 years on charges of sabotage before being released and eventually elected president.

“He continues to inspire the world through his example of courage and compassion. Nelson Mandela was held captive for many years. But he never became a prisoner of his past”, Guterres said.

The UN chief noted that Mandela poured his energy into reconciliation and his vision of a peaceful, multi-ethnic, democratic South Africa.

Nelson Mandela was a global advocate for justice and equality #MandelaDay

“Rarely has one person in history done so much to stir people’s dreams and move them to action,” the UN chief said adding: “That struggle for equality, dignity and justice continues.”

In December 2015, the General Assembly decided to extend the scope of Nelson Mandela International Day to also promote humane conditions of imprisonment and to encourage societies everywhere to treat prisoners as a continuous part of society by adopting the revised UN Standard Minimum Rules for the Treatment of Prisoners, known as the “Nelson Mandela Rules”.

The Rules added important safeguards, including an absolute prohibition on torture and ill-treatment and clear restrictions on the use of solitary confinement, instruments of restraint and intrusive searches, as well as detailed guidance on prisoners’ rights to equivalent health-care services.

Yury Fedotov, Executive Director of the UN Office on Drugs and Crime (UNODC), said a nation should be judged by how it treats its lowest citizens, not the highest ones.

“Nelson Mandela spent 27 years in prison in the course of his struggle for justice. He knew better than anyone that ‘no one truly knows a nation until one has been inside its jails.

“A nation should not be judged by how it treats its highest citizens but its lowest ones’”, the UNODC chief said.

Fedetov said his office would assist all countries in translating these rules into action, to promote humane conditions of imprisonment and ensure no part of society is forgotten.

“Nelson Mandela International Day 2018 marks 100 years since the birth of a true hero who left the world a better and more just place than he found it,” Fedotov said.