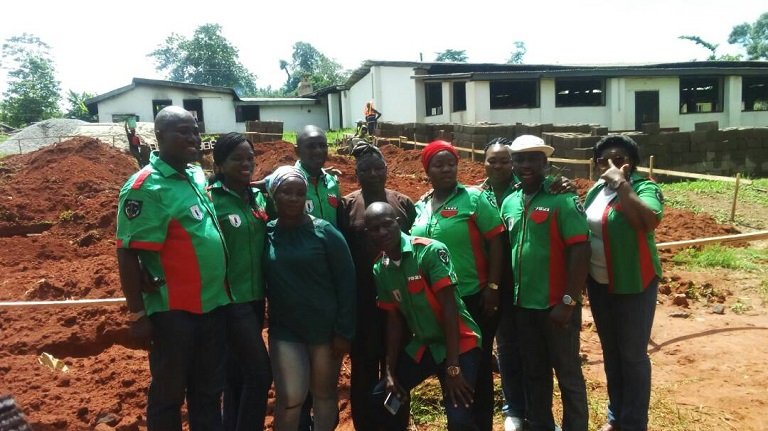 The 1989/1994 set of Mayflower Old Students Association (MOSA) of Mayflower School, Ikenne, Ogun State formed in 2012 has laid the foundation for a new ultra modern clinic within the school as a way of giving back for the excellent indoctrination bestowed on them by the late proprietor Tai Solarin.

According to the President of the association, Ex-May Honourable Sumbo Sogunle-Muniru says alunmi decided that it was time they gave back to the school where they had their formative years.

“The purpose of coming together is to give back to the school. This is a citadel of excellence where moral development and discipline as well as act of good conduct and self reliance were part of the curriculum at Mayflower.

She added that the conceptualized project was aimed at celebrating the 25th anniversary of the 89/94 set who graduated from the school.

She stated that based on the observation of the association the school does not have a functional clinic to attend to the medical needs of the students and staff of the school since the establishment of the school in 1956.

“It is quite disturbing and heartbreaking should any medical emergency arises, there is no functional medical facility for immediate medical attention’

The project chairman and supervisor Ex-May Wale Abdul explained that the foundation of the clinic was laid on 3 June in remembrance of the last day the set graduated from school.

He added that the clinic will be constructed in such a way that it can be upgraded to a hospital in the nearest future.

He said the time frame for the completion of the project which comprises of wards, rooms for doctors and nurses, a drug store, toilets, reception is set for about five months, with an official inauguration expected to take place in January 2019 in commemoration of the 89/94 25th anniversary.

He noted that the alumni will also construct a record section and new bore hole as part of the project.

One of the members of the 89/94 set, Honuarable Saheed Akinade Fijabi representing Ibadan SouthWest/NorthWest Federal constituency in the Federal House of Representatives explained that the unity and team work of 89/94 Old Student Association has helped them achieve the goal of giving back to the school and humanity at large.

He assured the students and the management of the school of continuous support from the association regarding the maintenance of the clinic as the school, management and clinical staff play their roles for a long term benefits.

He urged companies and other Mayflower sets to partner with the school for the progress of students and the legacy of Tai Solarin.

In his vote of thanks, the Vice Principal (Academic) Alhaji Disu Bolanle and the Senior Prefect of the school Etebu Tombara appreciated the members of the association and promised to ensure proper maintenance of the clinic as it is going to be of great benefit to the school.