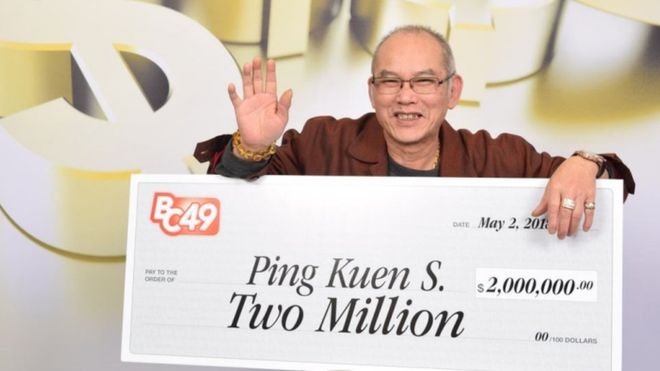 Ping Kuen Shum won the lottery on the day he retired from work
Courtesy: BCLC

In what might just be the best day ever, a Canadian man has won a lottery jackpot on the day he retired, which was also his birthday.

Vancouver’s Ping Kuen Shum bought a lotto ticket on 28 April as he was in high spirits from his birthday and the last day of his working life.

That night, the British Columbia Lottery Corporation confirmed that he had just scooped C$2m ($1.5m; £1.1m).

Mr Ping celebrated by tucking into a dim sum meal with family and friends.

He is planning a trip to China with his newly acquired retirement nest egg.

“It’s unbelievable that all three events happened on the same day,” said Mr Ping of his astonishing hat-trick.

“I have worked hard for so many years and I’m looking forward to sharing this fortune with my family.”

The British Columbia Lottery Corporation calculated the chances of getting all six numbers as one in 13,983,816.

The organisation said it could not disclose Mr Ping’s age and occupation.