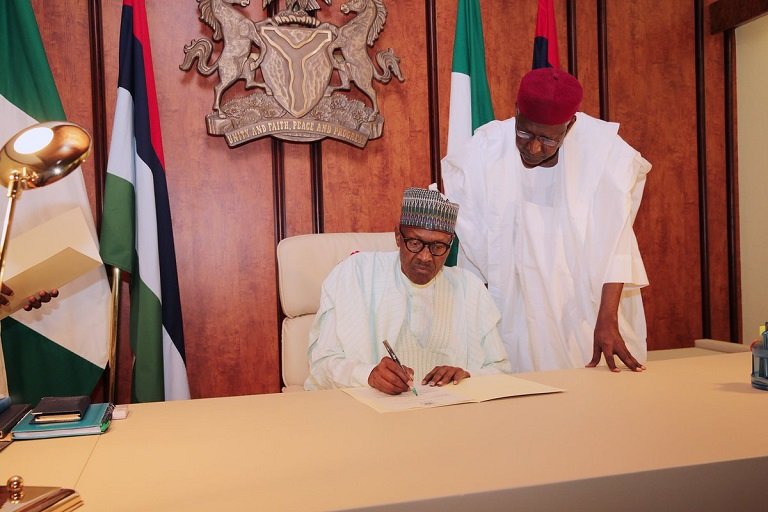 The country is gearing itself up for the General Elections in February next year and with President Muhammadu Buhari announcing that he will bid for the governing Party, APC’s ticket to run fo a second term, all hell has been let loose by the chaotic, ill-prepared opposition camp.

A joke on WhatsApp last week was about the abuse and insults heaped on Muhammadu Buhari, attacking him for everything wrong with the country but failing to answer an important question: who do you have that is better?

In democracies around the globe, second terms by incumbents are usually harder to get simply because, somehow, there is always some kind of anti-incumbency leading to a loss of faith among those supporters.

For President Buhari, who won with massive votes in 2015, his major challenge is to do as well as he did, or even better. He came to power with a lot of expectations and Nigerians had, justifiably placed very high hopes on him. As we said sometimes back, he as a consequence, has became a victim of the tyranny of expectations. The weight of unrealistic expectations has evidently blinded many of the people from seeing the revolutionary changes happening across the nation.

Nigerians expected him to undo the damage in several decades of misgovernance and naturally, many are already feeling frustrated that he hadn’t done that in three years.

The problem with our opposition is that beyond fault-finding, they are unable to give or innovate a vision of their own on how they can make the nation better.

A so-called Third Force has failed to get political traction since it birth. This is understandable, given that they have promised to give the country everything that is new but have so far produced no new faces, no new ways of doing things. Certainly, there is no face that can be called the President of Nigeria.

For the Peoples Democratic Party, PDP parading itself on the glory of being the largest opposition, the party has not less than 10 leaders acutely ambitious to rule Nigeria. It will take them minimally two to three terms of presidential tenure, that is eight to twelve years to reinvent the party.

Looking at the entire opposition landscape, it can be said that they cannot be united by ideology, the type that made the pre-2015 opposition fuse into a formidable challenger that pushed an incumbent out of office. There is in no way therefore, they can choose leaders with unanimity.

What then they have taken to, is scaremongering by fanning ethnic and religious divisions among the minorities especially in the Middle Belt where hundreds of innocent citizens are confronted with violent death.

Before they take the words out of my mouth, let me state that the spate of those killings are tragic and unacceptable. They ought not happen and I’am aware of how sad the Presidency is about these unfortunate goings-on. And there is so much that is being done to end the killings.

More, however, could still have been achieved if there is cooperation extended to the security agencies by everyone, and by everyone, I mean especially the political opposition. A political warlord recently ordered the provocative stoning of a Nigerian Air Force personnel as their chopper landed in a Northeastern state.

Today, government has irrefutable evidence that much as most of these killings are arising from herdsmen-farmers attacks, some of it is driven by politicians. The recent arrests by the army in Taraba State point to a clear political sponsorship, and the kingpins, some of whom have been arrested have been handed over to the DSS for further investigation. Others who are being sought have either gone into hiding or they are pulling strings of blackmail to force the hands of government to abandon the search for them.

It is clear by now that the Middle Belt killings even if they are not caused by the opposition are no doubt seen as a political opportunity to set the tone for the 2019 elections.

Another matter of great disappointment is the ongoing attempt to victimize a group of religious leaders, the Arewa Pastors Initiative for Peace, representing 45,000 members, simply because they paid a visit to President Buhari. We see this development as an unnecessary distraction at a time the country should be united against its common problems and challenges.

We are both mystified and disturbed by the growing lack of tolerance and accommodation by some groups who see it as their birth right to visit and address the President on their issues but lack the modicum of respect for others to do the same. It is regrettable that an innocuous visit is becoming a subject of needless and unprintable attacks on the President and his visitors for doing nothing wrong.

For the avoidance of doubt, the President would not want to set a dangerous precedent for the country by discriminating against any group exercising their democratic rights of freedom of speech and association.

The Vice President, Professor Yemi Osinbajo told the tale of the toad at the Asiwaju Bola Tinubu Colloquium recently in Lagos. “Let’s discuss tails,” the toad was told. It, not having a tail, the toad said, “no, let’s talk about other things.”

Rather than coming to the table to discuss what has been achieved or not in key areas of policy, the conversation is today limited to one, the morbid tale of the relationship between farmers and herders.

Sad as these incidents involving farmers and herdsmen are, I wonder what the result will be if half the newsprint and airtime devoted to this is used to draw attention to malaria which kills 300,000 Nigerians every year; the 88,000 malnourished children and the 230,000 malnourished, pregnant women in the northeast, a quarter of whom the UNICEF said would most likely not make it.

An important motivation for President Buhari’s bid for second term is that the gains made from 2015 should not be frittered. Buhari is not involved in corruption and is not desperate for the office. He is among the few leaders we have who are not obsessed with money, cars and homes but working passionately for the country’s economy, peace and safety. If a corrupt politician wins, we will go back to where we were in 2015.

Many by now have forgotten where we are coming from. The daily bomb blasts in our cities between 2012 and 2015 including the deadly attack on the United Nations office in Abuja have been forgotten by many. The Juma’at Mosque bomb attack on Kano that left 300 dead and the theft of 270 girls in Chibok as they assembled to write their final exams, with 113 yet to return have for many, faded into history.

We lived in perpetual fear. I remember the story of the roadside Mosque in one settlement in which a black plastic bag was noticed by the congregation as the Imam led in prayer. The entire congregation fizzled out, the Imam realizing that he was left alone only from the eerie air of silence after everyone had quietly left.

Today, religious gatherings and crowded markets have resumed. Witnesses reported that Abuja and Kaduna witnessed the largest simultaneous assembly of people when the Tijjaniyya Islamic movement celebrated their Maulud a week ago without the fear of bomb blasts.

Cabinet meetings are now about how trillions of Naira are to be used to provide long delayed infrastructure such as roads, bridges, railway, power, drugs and equipment for hospitals. Grand corruption, by which ministers sat around the table to share money drawn from the treasury has been ended.

A majority of our people are farmers who depend on good rains, access to land and fertilizer to grow the food they eat and sell the surplus to make money for school fees for their children and where possible, add a wife or two and make the Hajj or other plans.

This administration has broken the jinx of fertilizer shortage and its high cost and has put land clearing for agriculture on a priority. Loans at low or no interest rates are being given by the Central Bank of Nigeria, the Bank of Agriculture, the Bank of Industry and the Development Bank. It will take years to raise our rising population from poverty. Even in China, with the world’s fastest growing economy, this, still, is a work in progress.

The administration is doing so much for women, children and our enterprising youths. This is the first time anyone has given our country a social welfare scheme.

By it, 7.5 million children are served free meals in schools. This has improved school attendance. Two Hundred thousand graduates are now enrolled in N-Power, and 300,000 have just passed screening in the biggest, most audacious employment scheme on the continent.

Our youths have a lot of ideas and many who need support, mentoring and guidance under the various schemes under the Social Investment Programme of the government are getting help.

Three years on, the economy has seen a paradigm shift with agriculture getting a pride of place. We are importing 90 percent less rice than we did three years back. The World Bank has certified Nigeria as being one of the top ten most improved economies in the world. Power ministry has done commendably well, raising generation from an average of 2,600 megawatts to 7,500 mw.

Today, each state has a minimum of between one to five federal roads under construction or reconstruction. Some have as many as eight or nine. The legendary second Niger Bridge is by now 44 percent complete, putting to shame the many years of platitude and lies by several past administrations.

With the advent of the Buhari administration, foreign policy has become robust. Nigerian enjoys a good reputation in West Africa, Africa and the world.

What this government is doing is different and the results are showing, for example:

– Reversing the decline which began in 2014 and stabilizing the economy for Nigerians.

– Economic restructuring for the growth of private sector as the best solution to unemployment.

– Re-establishment of collaborative working relationship between the President and the Vice President as model of how Northern/Southern, Muslim/Christian, Older/Younger Nigerians can and should work together.

The thing about Second Term in all political climes is that voters must have a practical reason to vote for someone. President Buhari has not given anyone an excuse not to choose him on this count. His is an administration that has something for everyone.

Supporters who talk about a noticeable loss of faith by some must note that there is nothing permanent in politics. Many of the allies will, in pursuit of power, come back to the APC, being the party with superior power.

The party did extremely well in the North to come to power and every indication is that in 2019, it will do in the South, what it did in the North in 2015.

By the way, did anyone notice the poll on who to choose in 2019 by a young man, Mark Essien @markessien on Twitter? Buhari supporters need to read that to cheer up!

Garba Shehu, is the Senior Special Assistant to the President (Media and Publicity)

Duchess of Cambridge goes into labour