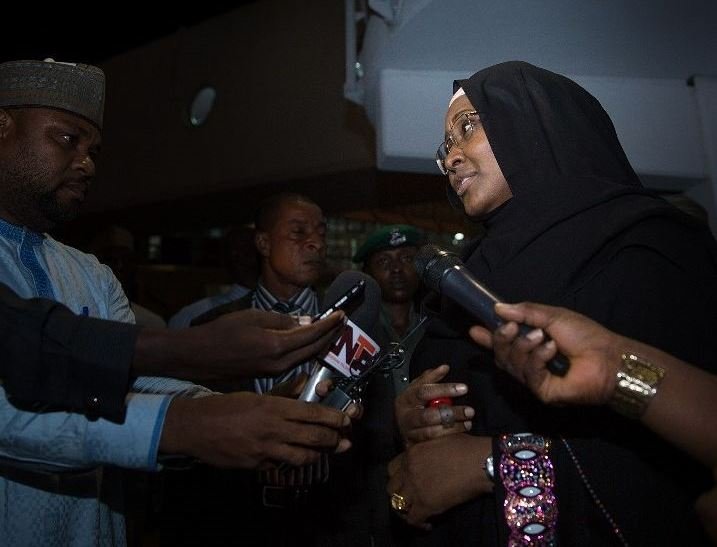 Aisha Buhari, wife of the Nigerian President said today that she shares in the sorrow and agony of parents of abducted Chibok and Dapchi schoolgirls and other abducted girls in the country.

She expressed the concern in Abuja on Thursday while delivering a speech she titled: “Leave Our Daughters Alone”, to mark the 2018 International Women’s Day.

“As a mother, I share (in) the sorrow and agony which the parents are going through up to this moment.

“I am aware of the efforts being made for the release of the remaining Chibok girls as well as the recently (abducted) Dapchi girls.

“It is my sincere hope that the efforts will yield positive results.”

The wife of the President said that the abductions have further exposed the long-standing evil perpetrated against women in the society.

She, therefore, called on relevant stakeholders, especially the media, to stand against the “disturbing issue’’.

“It is a disturbing issue for which we must put heads together, pray, speak out, show concern and ensure that the situation come an end.”

She, therefore, called on Nigerians, especially the media to join the campaign against all forms of abduction and maltreatment of the Nigerian woman.

Aisha said it was unfortunate that celebration of the 2018 International Women`s day came with pains and agony following the abduction of the Dapchi School girls.

She also expressed concern over the use of young girls by insurgents to carry out suicide bombing.

She, however, congratulated Nigerian women for successfully marking the Day and prayed for greater opportunities for the Nigerian woman.

The wife of the president also prayed for Nigerian women to have equal opportunities in governance as their male counterparts.

The wife of Vice-President, Mrs Dolapo Osinbajo, said the 2018 event came at a time of celebrating the progress made by Nigerian team at the Winter Olympics, and a time of unhappiness over the abduction of the Dapchi schoolgirls.

Dolapo also called for equal opportunity to the women.

The News Agency of Nigeria (NAN) reports that the United Nations set aside March 8, of every year to mark the International women`s day.

The event was organised by the National Centre for Women Development in collaboration with the wife of the President.