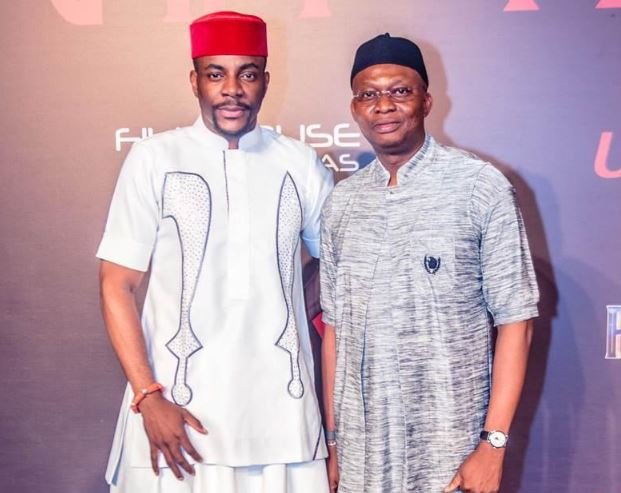 Pan African Financial Institution, United Bank for Africa (UBA) Plc again showcased its footprint in the world of entertainment as it premiered the most anticipated movie of the year #BlackPanther, A Night in Wakanda.

The movie which was hosted by TV personality Ebuka Obi-Uchendu premiered over the weekend at Imax Cinemas in Lekki, and saw a gathering of top personalities in the world of entertainment and finance led by the Chairman UBA Group, Mr Tony Elumelu and his lovely wife and children, the GMD Kennedy Uzoka and his wife Lotanna; the DMD Victor Osadolor and other top executives of the bank.

A-list artists and media gurus such as Mo Abudu, Omoni Oboli, Eyinnaya Osigwe, Lala Akindoju, Noble Igwe; female African footballer of the year Asisat Oshoala and a host of others were also on ground to showcase Africa’s excellence dressed in their African finery as Kings and Queens.

Uzoka who arrived early to welcome guests at the premiere said that as Africa’s Global Bank, UBA will continue to support any event that promotes the culture and heritage of the African continent.

He added that Leo, UBA’s flagship chat personality had given out a number of free tickets to ensure that ordinary Nigerians were able to participate in the epoch-making event.

The entire Imax cinemas was acquired for the night by UBA to allow for the crowd of movie lovers who had thronged the venue to the Black Panther.

UBA certainly knows how to put its customers first.

Tony Elumelu and his wife Awele at the premiere of Black Panther at Imax Cinemas in Lekki, Lagos