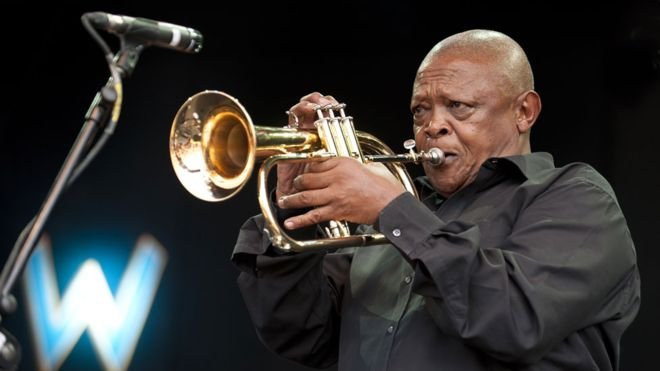 His family first made his death known in a statement.

“After a protracted and courageous battle with prostate cancer, he passed peacefully in Johannesburg,” Masekela’s family said in a statement.

It hailed his “activist contribution” to music, which it said “was contained in the minds and memory of millions.”

Later, South Africa’s minister of arts and Culture, Nathi Mthethwa confirmed the death on Twitter, with a moving tribute.

“A baobab tree has fallen, the nation has lost a one of a kind musician with the passing of Jazz legend bra Hugh Masekela. We can safely say bra Hugh was one of the great architects of Afro-Jazz and he uplifted the soul of our nation through his timeless music”, Mthethwa tweeted.

There has been an outpouring of tributes to his music, his long career and his anti-apartheid activism.

“He kept the torch of freedom alive globally fighting apartheid through his music and mobilising international support,” Zuma said.

“It is an immeasurable loss to the music industry and to the country at large.”

Masekela fled apartheid South Africa in 1960, and did not return until after the release of Nelson Mandela in 1990.

Among his greatest hits were the beloved anthem “Bring Him Back Home”, demanding Mandela’s freedom from jail, and “Grazing in the Grass”.

Grazing In The Grass topped the Billboard Hot 100. He was the first African male Grammy nominee (1968). He won the Lifetime Achievement Award at the CHOMVA, Ghana Music Awards, Jazz FM Awards and MAMAs.

Keeping up his international touring schedule into his 70s with energetic shows, his concerts at home often became mass sing-alongs.

“I took to it like a fish to water. I was a natural,” he recalled.

Masekela spent his early years in a conservative small town east of Johannesburg, surrounded by coal mines that relied on cheap black labour.

“It was in those days in Witbank that music first captured my soul, forced me to recognise its power,” he wrote in his candid autobiography “Still Grazing”.

Growing up under the worst of apartheid’s racial laws that classified blacks as second-class citizens, Masekela was desperate to leave the country that he described as cursed.

“When the airplane finally took off, it was as though a very heavy weight had been taken off me — as if I had been painfully constipated for 21 years,” he said of his flight to London.

Despite his long exile, the aching pain of a country ripped apart by skin colour never left his music.

Masekela moved to New York to study at the Manhattan School of Music and fell into a fast-paced life alongside fellow South African legend Miriam Makeba and giants of music like Dizzy Gillespie and Harry Belafonte.

Masekela and Makeba were briefly married in the early 1960s.

His first number one was the 1968 breezy single “Grazing in the Grass” which topped the US charts while he was living in Los Angeles and hanging out with stars like Jimi Hendrix and Marvin Gaye.

He later spent several years in West Africa, where he played with Nigeria’s Fela Anikulapo Kuti, and in 1974 helped organise a three-day festival ahead of the “Rumble in the Jungle” boxing clash between Muhammad Ali and George Foreman.

In the 1980s, he built a mobile recording studio in Botswana where he lived for several years, toured with Paul Simon of “Graceland” fame and helped with the score for the hit musical “Sarafina!”

A charismatic horn blower and vocalist, Masekela’s songs ranged from the haunting “Stimela” about trains taking black workers to South Africa’s mines, to the cheeky energy of “Thanayi” about a large woman’s struggle with food.

But his life was also filled with excess — women, alcohol and drugs — with which he struggled from his youth.

“I was drunk on money — when I could find it — drugs, which were never hard to find, love, lust and music, and in no hurry to sober up,” he wrote.

Affectionately known as “Bra Hugh”, Masekela finally returned to South Africa after the release of Mandela, who telephoned him while he was in New York.

“He uplifted the soul of our nation through his timeless music.”