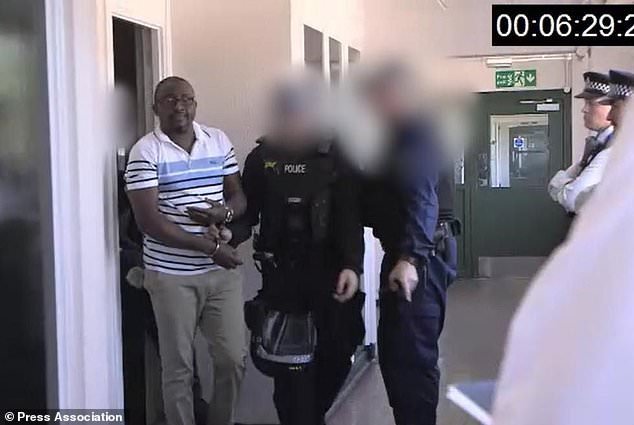 Abdul Azeeza was a professional footballer in the Nigerian league before his involvement in fake immigration documents in the UK
Photo: Home Office/PA Wire

A former Nigerian footballer and six men have been jailed for an operation which made fake identity documents including counterfeit British passports.

From late 2015 to June 2017, officers unravelled the wide-scale manufacture and distribution of counterfeit documents by a London and Midlands gang who created the fake IDs to help immigration offenders live illegally in the UK.

Gang leader Steven Kanaventi, 39, was jailed for 40 months and two weeks at Woolwich Crown Court on Friday after an undercover police officer placed orders with him in June 2016.

Prosecutor Lisa Hancox told the court: “Steven Kanaventi is the person who was at the coal face of taking orders and money and then the chain ran from there.”

Kanaventi, of Mulliner Street, Coventry, supplied the officer with a string of fake documents, including three passports for £800 each, a British residency permit for £600 and a university degree certificate for £200.

She said that in one conversation with the officer, “Steven Kanaventi said he would offer £100 for each new customer that the undercover officer supplied”.

But the documents were not foolproof and the gang’s capability to provide false ID was “exaggerated”.

In sentencing Kanaventi, Judge Brendan Finucane said he “had a very significant role in this enterprise”, as a result of being partly responsible for ordering, supplying and delivering the false documents.

Kanaventi pleaded guilty to conspiracy to manufacture a fake document, after the investigation led by the Immigration Enforcement Criminal and Financial Investigation (CFI) team unravelled the operation.

Abdul Azeeza, an ex-professional footballer, was sentenced to four years’ imprisonment after the court heard that “it was at his address” that the factory producing the false documents was found.

The former goalkeeper, 58, who once represented a club in the Nigerian equivalent of the Premier League before retiring through injury in 1996, was found with a false passport in his back pocket, a residency card in his wallet and “all the implements of making them on the kitchen table”.

Some of the items needed to make fake documents, including specially adapted tools for dismantling passports, threads for stitching, paint thinners and laminate, were found at his home in Missenden, Inville Road, south London.

Azeeza pleaded guilty to two counts of possessing an identity document with improper intent and possessing equipment with the intention of making fake documents.

Alfred Adekoya, of Kingslake Street, London, was sentenced to 40 months and two weeks in custody after pleading guilty to conspiracy to manufacture a fake document.

Adekoya, 47, had been seen frequenting Azeeza’s address, and was found with three counterfeit British passports on his arrest.

Victor Ariyo, of Rye Hill Park, London, acted as a go-between for Kanaventi and Adekoya, the court heard.

In a police interview Ariyo, 53, said he was a go-between for “a spiritual service, and that is why money passed through his account”.

But he admitted conspiracy to manufacture a fake document and money laundering, and was sentenced to three years in custody.

Luke Nkanta, who acted as a courier, was sentenced to 16 months imprisonment after pleading guilty to possession of an identity document with improper intention.

The court heard that in June 2017 Nkanta, 29, met Adekoya outside the Coral bookmakers in Woolwich, east London.

When Nkanta, of Wordsworth House, Woolwich, was searched shortly afterwards, officers found a counterfeit passport, an order sheet for the passport and a copy of the photograph used in the document.

Paul Kanaventi, 37, of Forster Street, Nottingham, pleaded guilty to converting criminal property after he allowed Steven Kanaventi to use his bank account, and set up an email address in his name, and was jailed for nine months.

He said he did not know that the money going through the bank account was being used for criminal purposes, but admitted suspecting it.

Madalitso Majawa, 33, of Ombersley Close, Redditch, was sentenced to six months imprisonment after pleading guilty to possession of an identity document with improper intent.

CFI inspector Ben Thomas said: “The criminal business that Kanaventi and Adekoya were running was designed to undermine the fundamental immigration rule that if you have no legal status in the UK, you have no right to work.

“Their customers hoped that the fake documents would be enough to convince prospective employers that they were entitled to work, in turn allowing them to a build a life for themselves in the UK to which they were simply not entitled.

“By bringing Kanaventi, Adekoya and their associates to justice we have stopped a concerted, systematic and financially motivated assault on the UK’s immigration system.”