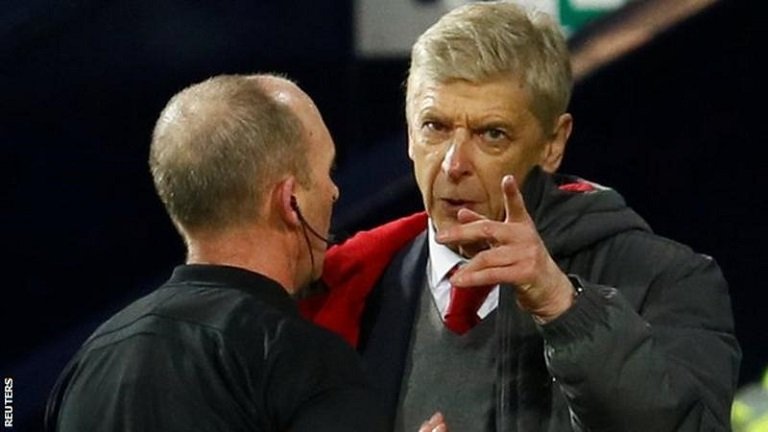 Arsenal manager Arsene Wenger has been given a three-match touchline ban and fined £40,000 for his behaviour in the referee’s changing room after Sunday’s game against West Brom.

A Football Association statement said the Frenchman admitted “his language and behaviour was abusive, improper and questioned the integrity of the match referee”.

Wenger was angered by referee Mike Dean after his side’s 1-1 draw at The Hawthorns, where Calum Chambers conceded a late penalty for handball.

He will start the punishment in the FA Cup third-round tie at Nottingham Forest on Sunday and it will take in two other away games, in the first leg of the Carabao Cup semi-final at Chelsea and against Bournemouth in the Premier League.

In a separate case, Wenger has been asked to respond to the FA about views he expressed on officiating before and after Wednesday’s 2-2 draw with Chelsea in the league.

At a news conference earlier on Friday, the Arsenal boss said he served football with “honesty and integrity”.

“From what I’ve heard and seen in tunnels and dressing rooms down the years, I’m surprised and shocked to be charged,” he said.

🍴 Mr Wenger, if you'd like to upgrade your stand ticket to a hospitality package then you can do so by following this link. #NFFChttps://t.co/nLGrdSD50S

Wenger was frustrated after Wednesday’s draw with Chelsea at Emirates Stadium, where he called decisions made against Arsenal a “concerning coincidence”.

Part of his anger stemmed from a penalty the away side won when Eden Hazard was deemed to have been fouled by Hector Bellerin by referee Anthony Taylor – a decision branded “farcical”.

The FA wants his explanation of these comments by 18:00 GMT on Tuesday 9 January.

“Yes I have been asked [to respond] and I maintain what I said in the press conference, 100%,” Wenger added. “Overall, basically nothing has changed. I try to serve this game with honesty and integrity and when I have something to say, I say it.

“I respect everyone’s opinion. I feel it was a yellow card for Hazard. I have the right to have an opinion.”