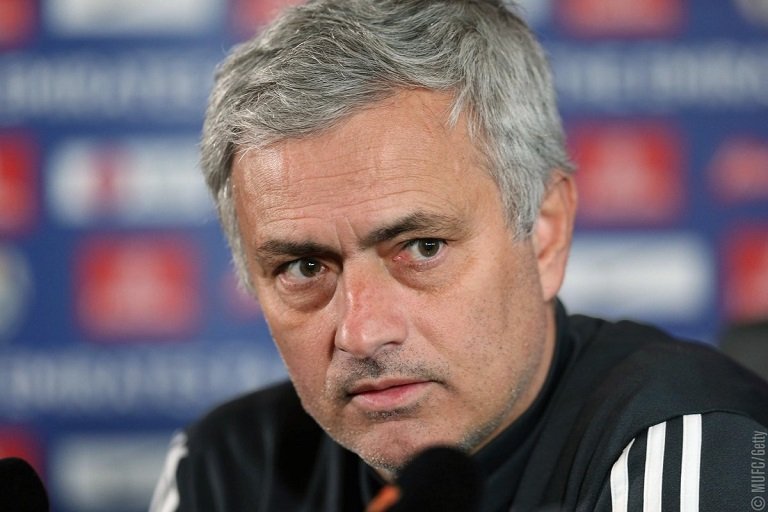 Manchester United manager Jose Mourinho had water and milk thrown at him in a row following Manchester City’s derby win at Old Trafford.

United were upset at what they viewed as an excessive City reaction to Sunday’s 2-1 win, which sent them 11 points clear at the top of the table.

City’s players celebrated with their fans after the final whistle and coaching staff tried to persuade manager Pep Guardiola to join them, but he refused.

After the players headed down the tunnel, it is understood Mourinho made his feelings known in the corridor from which both dressing rooms are accessed as he made his way back out to do post-match interviews.

City players celebrated after the match

The City camp reacted, with Brazil goalkeeper Ederson and Mourinho exchanging words angrily in Portuguese – but Mourinho carried out his post-match media engagements as normal and made no mention of it.

It has also been reported that City coach Mikel Arteta was left with blood running down his face from a cut to the head, apparently as a result of the skirmish, although it has been stressed no punches were thrown.

In October 2004, then United manager Sir Alex Ferguson was hit by pizza thrown by Arsenal midfielder Cesc Fabregas after a bad tempered encounter between the sides at Old Trafford.

In the build-up to Sunday’s Premier League game, City were irritated when United denied them permission to use cameras to gather footage for their £10m behind-the-scenes documentary.

The Old Trafford club said there was not enough room because of the number of rights holders wanting to attend the game.

In his pre-match news conference – and again on Sunday – Mourinho said he did not think he would be allowed to make to make a political statement on the touchline like Guardiola.

The City boss has recently worn a yellow ribbon – a symbol of protest against the imprisonment of pro-independence politicians in the Spanish region of Catalonia.

Mourinho also suggested on Friday that City players go to ground too easily, saying: “A little bit of wind and they fall.”

However, on Sunday United midfielder Ander Herrera was booked for diving in the second half when he went down in the box under challenge from Nicolas Otamendi – though his Portuguese boss was adamant his side should have been awarded a penalty.